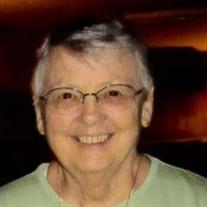 Arlene Elzora Gobin, age 85 of Gotham, died Wednesday, August 12, 2015, at the Richland Hospital surrounded by her family. She was born on June 4, 1930 in Scott Township, Crawford County. Her parents were Ray C. and Violet (Whiteaker) Miller. She attended Lower West Fork School and graduated from Blue River High School in 1948. On September 21, 1950, Arlene married Leonard Gobin and made their home in Boscobel. In 1959, they moved to Gotham where they operated Gobin’s Standard Service. She worked at the Gotham Store for many years. On August 30, 1985, Arlene was sworn in as the Postmaster in Gotham. She worked there until her retirement on March 31, 2003. Arlene enjoyed reading, calligraphy, gardening and taking great care of her many house plants. When her children were young, she enjoyed knitting, sewing and making Halloween costumes. She was an avid photographer capturing every event she attended. She enjoyed dancing especially with her sister, Joyce, to the music of the Miller Band. Her love for genealogy triggered the idea to start three family reunions – Gobin, Miller and Whiteaker. Each of these reunions has been ongoing for over 35 years. Sending greeting cards for birthdays, every holiday and get well wishes was important to her. Although she really enjoyed visiting with people at the Post Office, spending time with family was most important to her. Arlene is survived by her five children: Theron (Becky) Gobin of Boaz, Amy (Donald) Reyzek of Richland Center, Gary (Barb) Gobin of Bear Valley, Anita Gobin of Richland Center, and Julia Fleming of Gotham, three sisters: Joyce (Keith) Craig of Boaz, Sharon Connely of Boscobel and Lila Kalish of Boscobel, a brother: Myral (Harlean) Miller of Janesville, thirteen grandchildren: Sara and Michael (Theron), Krista, Kimberly, Kelly and Bradley & Rhonda (Amy), Chris and Tracy (Gary), Cody and Jesse (Anita) and Cole, Kayla, and Carly (Julia), twelve great grandchildren: Elzora (Sara), Courtney and Whitney (Krista), Bailey and Olivia (Kimberly), Jaxon, Arianna, Brianna and Bodyn (Bradley), and Jaelynn, Lolavie and Loki (Chris), many nieces, nephews, cousins, other relatives and friends. She was preceded in death by her husband, Leonard, brother-in-law Robert Connely Jr. and her parents. Funeral Services will be held on Monday, August 17, 2015 at 11:00 AM at the Clary Memorial Funeral Home in Richland Center. Burial will be held in the West Fork Cemetery in Richwood Township, Richland County. Visitation will be held on Sunday at the Clary Memorial Funeral Home from 2:00 PM to 6:00 PM and also on Monday from 10:00 AM until the time of services. Memorials can be made to the Walk with G.R.A.C.E.

Arlene Elzora Gobin, age 85 of Gotham, died Wednesday, August 12, 2015, at the Richland Hospital surrounded by her family. She was born on June 4, 1930 in Scott Township, Crawford County. Her parents were Ray C. and Violet (Whiteaker) Miller.... View Obituary & Service Information

The family of Arlene Elzora Gobin created this Life Tributes page to make it easy to share your memories.

Send flowers to the Gobin family.