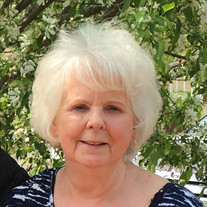 Barbara Gail Meacham, age 71, of Lone Rock passed away on Thursday, October 4, 2018, at her daughters home in Tomah surrounded by her family. She was born on February 9, 1947, in Black River Falls, Wisconsin, the daughter of Gweneth Vennard and Belva Joan (Spors) Osley. She married Steven James Meacham on June 13, 1965, in Sparta, Wisconsin. Barb grew up on a modest farm in Jackson County. She worked at the Tomah VA Hospital, head cook for Kickapoo High School, owner operator of the Hi-Way Mart in Lone Rock, and at Roundy’s GM in Mazomanie for 21 years and retired in 2010. She had perfect attendance at Roundy’s and superior performance and dietetics at the VA Hospital in Tomah. She co-owned a cottage on the Petenwell flowage. Barb was raised with traditional values and did her best to practice them; her hobbies included cooking, sewing, and a passion for history. Barb’s hobbies and interest were few but precious to her, she loved spending time with her family especially her grandchildren and great grandchild. Barb looked forward to her annual sister vacations, sometimes they didn’t travel far but they laughed a lot. She never missed the weekly coffee dates with her close friends and her friends came to her if she couldn’t get to them. Barb was an avid Packer, Brewer, and Badger fan. If there was a game on she was watching. Survivors include: 2 daughters, Jan (Rod) Sherwood of Tomah, WI, Gwen (Dave) Gilbertson of Spring Green, WI; 6 grandchildren, Cole Alyssa, and Asher Sherwood all of Tomah, WI, Erik, Alex, and Rebecca Gilbertson all of Spring Green; a great grandson, Joshua Gilbertson of Spring Green, WI; brothers and sisters, Gweneth Wegner, Karen (Mel) Krause, Kathy Young, Chuck (Nancy) Osley, Brad Osley; sisters-in-law Dr. Marion Hemstrom-Krainess of Chicago, IL, Professor Kitty Meacham of Toronto, Canada, Ann Thayer of Kendall, WI; brother-in-law, Dr. Mark Meacham; nieces, nephews, other relatives and friends. She was preceded in death by parents; husband; 2 brothers-in-law, Dewitt Wegner, Mervin Thayer; father/mother-in-law, Walter and Marion Meacham. Funeral Services will be held on Tuesday, October 9, 2018 at 11:00 AM at the Clary Memorial Funeral Home in Richland Center. Burial will be held in the Lone Rock Cemetery. Visitation will be held on Tuesday from 9:00 AM until the time of services. On line condolences can be made at www.CLARYMEMORIALFUNERALHOME.com A special thanks to caregivers Gweneth Wegner, Pattie Hemstrom and Lucy Sherwood; her friends Pat and Kay Werner, Alice and Ray Hatfield; special thanks to: the UW Carbone Center, Upland Hills Hospice, Tomah Hospice, Clary Memorial Funeral Home, Pastor Bob Streeter from Tomah Hospice and Pastor Craig Peach

Barbara Gail Meacham, age 71, of Lone Rock passed away on Thursday, October 4, 2018, at her daughters home in Tomah surrounded by her family. She was born on February 9, 1947, in Black River Falls, Wisconsin, the daughter of Gweneth Vennard... View Obituary & Service Information

The family of Barbara Gail Meacham created this Life Tributes page to make it easy to share your memories.

Send flowers to the Meacham family.