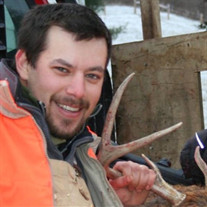 Benjamin “Ben” Daniel DeFabbio, 40, of Muscoda, WI died on November 24, 2017 at his home after tragically taking his own life and leaving all those that loved him deeply to bear the loss of a beautiful soul. Ben was born on October 25, 1977 in Fort Worth, Texas to Nicholas and Robin DeFabbio. At the age of 18 Ben joined the United States Navy and proudly served his country, taking great pride in following in his father’s footsteps. Ben was an avid outdoorsman who was passionate about hunting and fishing, although his greatest pleasure was found in the kitchen where he loved to prepare the most decadent meals for all those he cared for. Ben worked as a nurse where he found fulfillment in helping and caring for others. Ben was easily brought to tears sharing about his experiences as a nurse where he found solace in being present and empathetic with those who were suffering, needing a hand to hold and someone to show love. It is true that the broken are often those best equipped at healing the wounded. Ben was no stranger to pain and suffering. He shared that he never felt like he fit in or belonged, from childhood on. He waged war with himself, struggling in darkness, fighting, believing, hoping but in the end, he grew tired of fighting forces that he was unable to conquer. Ben knew Christ as Lord and Savior of his life and we look forward to the day we are reunited in Heaven, where there is no more pain and suffering. Ben is remembered by his sensitive kind spirit, his silliness, his infectious laugh, his love of family and his passionate desire and ability to make others laugh. He will forever live on in all those who knew and loved him. Special thanks to his uncle Jim Langkamp for his love, support, and efforts to reach Ben in the last weeks of his life. Ben is survived by his wife, Renee DeFabbio, children Garrett Gendron and Destiny DeFabbio, mother, Robin (Vinnie) DeFabbio, brother Christopher (Megan) Veurink, sister Cherith (Shane) Dilley, grandparents, Daniel and Mary Veurink, numerous uncles, aunts, cousins, relatives and friends. He was preceded in death by his father, Nicholas DeFabbio, grandparents, Robert and Jeanne Langkamp, aunt and uncle, Gary and Sue Langkamp. There will be a private family memorial service per Ben’s wishes. Memorials can be directed to the family. On line condolences can be made at www.clarymemorialfuneralhome.com

Benjamin &#8220;Ben&#8221; Daniel DeFabbio, 40, of Muscoda, WI died on November 24, 2017 at his home after tragically taking his own life and leaving all those that loved him deeply to bear the loss of a beautiful soul. Ben was born on October... View Obituary & Service Information

The family of Benjamin "Ben" Daniel DeFabbio created this Life Tributes page to make it easy to share your memories.

Send flowers to the DeFabbio family.