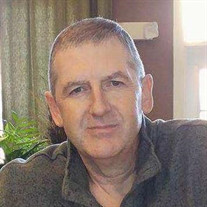 Billy Gene Schwandt, age 52, of Johnson City, Tennessee, formerly of Richland Center, Wisconsin died suddenly on December 19, 2016 at Erlanger Medical Center in Chattanooga, Tennessee. He was born on November 21, 1964 in Wisconsin the son of Leroy & Mary (Vegter) Schwandt. Billy worked as an over the road truck driver for 26 years. Survivors include his son, Anthony Schwandt of Lone Rock, WI; his mother, Mary Schwandt of Waupun, WI; 2 brothers, Mike Schwandt of Waupun, WI, Terry Schwandt of Waupun, WI; a sister, Robin (Jim) Meyer of Rockford, Illinois; nieces, nephews, other relatives and friends. He was preceded in death by his father Leroy Schwandt. A Celebration of Life Service will be held on Thursday, January 19, 2017 at 1:00 PM at the Clary Memorial Funeral Home in Richland Center, Wisconsin. Visitation will be held on Thursday, January 19, 2017 from Noon until the time of services. On line condolences can be made at www.clarymemorialfuneralhome.com

The family of Billy Gene Schwandt created this Life Tributes page to make it easy to share your memories.

Send flowers to the Schwandt family.