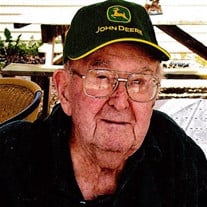 Carl F. Klinzing, age 100, of Sextonville died Tuesday, August 29, 2017 at Harvest Guest Home in Richland Center. Carl was born at the home farm on April 13, 1917 to Edward and Mabel Klinzing. Carl and Anieta (Stephens) purchased the adjoining farm in 1943 and were married August 23 of that year. Together they farmed for 17 years. In 1940 Carl helped organize a Boy Scout troop in Sextonville, for which he was Scout Master for many years. In 1960 they left the farm and moved to Sextonville, Carl became a partner in the Goplin Insurance Agency. He was an active member of the Kiiwanis Club. Carl and Anieta traveled extensively to 15 countries and every state in the continuous states except Hawaii. His hobbies included collecting guns, fishing, hunting and canoeing. Especially dear to Carl and Anieta was a cabin on a small lake in northern Wisconsin. They made frequent use of this for 25 years. Survivors include two nieces, Virginia (Stephen) Stigler, Chicago; Suzanne Lee, Bryan, Texas; grand nephews and nieces; Andrew, Geoffrey, Margaret and Elizabeth Stigler and Jennifer Skinner. Caring cousins by marriage; Robert, Donna Rae and Douglas Clasen, Ramona Eberhart, Dick Martin, Eulalie Boak and Pat Soderholm, other relatives and friends. He was preceded in death by his wife of 68 years, Anieta, his parents Edward and Mabel Klinzing, a sister and brother in law Doris and Robert Lee. The family of Carl Klinzing would like to acknowledge the wonderful and loving caregiving of Daniel Berns and Bonnie Klinzing to Carl through the years. Funeral Services will be held on Tuesday, September 5, 2017 at 11:00 AM at the Clary Memorial Funeral home with Fr. Eric Berns officiating. Burial will be held in the Ash Creek Cemetery. Visitation will be held on Tuesday, September 5, 2017 at the Clary Memorial Funeral Home from 9:30 AM until the time of services at 11:00 AM. Memorials can be made to a charity of your choice. On line condolences can be made at www.clarymemorial.com

The family of Carl Fredrick Klinzing created this Life Tributes page to make it easy to share your memories.

Send flowers to the Klinzing family.