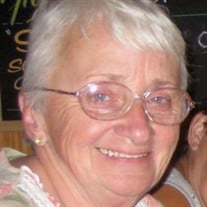 Carolyn L. Finucane, 84, passed away Friday, May 28, 2021, in Richland Center. Carolyn was born in Chicago, IL on August 9, 1936, to John and Gwendolyn (Lehman) Steadman. She married Thomas Finucane on October 8, 1955. Tom and Carolyn moved to Wisconsin in the early 1960’s, raising their seven children in Burlington, WI. Carolyn worked at Southern Wisconsin Center for twenty years, most of those as a food service supervisor. She was well-liked by her staff, being known for treating everyone fairly. They spent many of their retirement years in Iron River, WI. Carolyn was preceded in death by her husband Thomas, daughter Erin, and brothers-in-law Richard Miller and JC Sallee. She is survived by her in-laws Marilyn Miller of Burlington, WI; Carol Holmes of Texas; Kathy Sallee of Florida; Dennis (Minda) Finucane and Duane (Linda) Finucane of Colorado; and her children Colleen (Edward) Uhlenhake of Richland Center; Shawn (JoAn) of Clermont, FL; Patrick (Gina) of Harshaw, WI; and Brian (Patti Miller) Finucane, Theresa (Art Rice) Finucane, and Thomas (Christine) Finucane all of Burlington, WI. She is further survived by nine grandchildren, nine great grandchildren, extended family, and friends. A special thanks to the staff of Schmitt Woodland Hills for the care and compassion given to my mother during the last weeks of her life. A celebration of life for Tom and Carolyn is being planned for their anniversary in October. .

The family of Carolyn L. Finucane created this Life Tributes page to make it easy to share your memories.

Send flowers to the Finucane family.