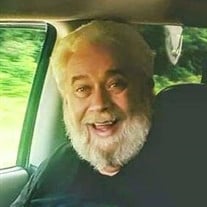 Chester “Chet” William Wilson, age 62, of Boaz, found peace at last on February 28, 2019 at the Gundersen Boscobel Hospital following a difficult battle with cancer. He was born on February 25, 1957 in Richland Center, the son of Cliffton William Wilson and Dorothy Dean (Tiser) Wilson. Chet met his wife, Julie Rose (née Hallen) Wilson, while working for American TV in Madison in the late 1980s. They married on March 30, 1990 and made their home in both Evansville and Madison before moving to the Richland Center area in 2001. Chet enjoyed many things in life, including watching the Packers, working on cars and motorcycles, fishing, camping, taking road trips, going to rummage sales, and cooking. More than anything, though, Chet loved his family. He cherished the time he spent with them above all else. Of the many things Chet did in his time, he said that he was most proud of the children he raised and he loved them both more than simple words could express. Chet was preceded in death by his parents, Cliffton and Dorothy. He is survived by his wife, Julie, his two children: Christopher, also of Boaz, and Elizabeth (Robert Fleischer) Wilson of Boscobel; his three sisters: Ginger (Harold) Hannum of Spring, TX, Grace (Carl) Schellenberger of La Valle, and Glee (Jerry) Moore of Richland Center, and many cousins, nieces, nephews, and friends. A memorial service will be held at a later time. Clary Memorial Funeral Home is assisting the family with the arrangements.

Chester &#8220;Chet&#8221; William Wilson, age 62, of Boaz, found peace at last on February 28, 2019 at the Gundersen Boscobel Hospital following a difficult battle with cancer. He was born on February 25, 1957 in Richland Center, the son of... View Obituary & Service Information

The family of Chester "Chet" William Wilson created this Life Tributes page to make it easy to share your memories.

Send flowers to the Wilson family.