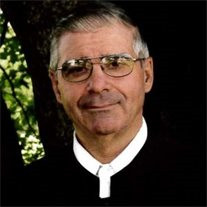 Dale L. Kulp, age 66, of Rural Richland Center, died Tuesday, March 19, 2013 at the Richland Hospital in Richland Center. Dale was born August 18, 1946 the son of Ernest and Martha (Ramer) Kulp in Goshen, Indiana. He attended elementary school at Union Center and high school at New Paris and Bethany High School. As a teenager he was baptized at Yellow Creek Wissler Mennonite Church, Wakarusa, Indiana. Because of his mechanical ability, at a young age he enjoyed taking apart and putting back together engines, appliances, etc. in his spare time. When Dale was in his early 20s, he spent 2 years in Topeka, Kansas for his 1W service. He attended Rosedale Bible institute several weeks in the winter of 1969. On Sunday, August 23, 1969 Dale married his beautiful bride, Mary Ellen Mullet at Fairview Mennonite Church. They were married 43 happy years. The first two years of their marriage were spent in mission work at Red Lake, Ontario. Their oldest daughter was born in Canada. In the following years the Lord blessed them with 4 more daughters and 2 sons. Dale was ordained to the office of minister at Buck Creek Mennonite Church, Richland Center, Wisconsin in 1991. The Lord also exercised Dale's leadership skills in using him for 14 years on the Maranatha Bible School Board. Dale's goal in this life was not to be rich in this world's goods but to lay up treasures in heaven. Dale is remembered for his giving and unselfish heart, dry sense of humor, positive attitude, contagious laugh, love for his wife and family, vision for Maranatha Bible School, concern for reconciliation, and support of missions. Survivors include his wife Mary Ellen Kulp of Richland Center, 7 children, Charlene (Marvin) King of Spain, Brenda (Delvin) Martin of Viola, Melissa (Laverne) Beachy of Mill Hall, Pennsylvania, Danette (Daryl) Kropf of Wickenburg, AZ, Karen Kulp of Abbeville, South Carolina, Jonathan (Annlyn) Kulp of Brooklyn, N.Y., Phillip (Lanita) Kulp of Hillsboro, WI, 27 grandchildren, his mother, Martha Kulp of New Paris, Indiana, 2 brothers, Stanley (Kathy) Kulp of Wakarusa, Indiana, David (Phyllis) Kulp of New Paris, Indiana, a sister, Rosemary (Ben Jr.) Shirk of Goshen, Indiana, many nieces, nephews, other relatives and friends. He was preceded in death by his father and an infant granddaughter Ariana Kulp. Funeral Services will be held on Sunday, March 24, 2013 at 10:00 AM at the Richland Center High School Gym. Burial will be held in the English Ridge Cemetery. Visitation will be held on Friday, March 22, 2013 at the Clary Memorial Funeral Home from 2- 4 PM & 6-8 PM. Visitation will also be held on Saturday, March 23, 2013 at the Clary Memorial Funeral Home from 2-4 PM and 6-8 PM. Also visitation will be held on Sunday from 9:00 AM until the time of services at 10:00 AM. In lieu of flowers memorials may be given to Maranatha Bible School. On line condolences can be made at www.clarymemorialfuneralhome.com

The family of Dale Lavern Kulp created this Life Tributes page to make it easy to share your memories.

Send flowers to the Kulp family.