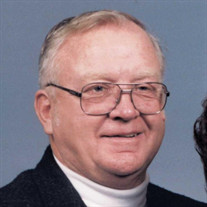 Daniel Eugene Berns died Monday, May 9th, 2022 at the Pine Valley Community Village in Richland Center. Dan spent his last year in the care of the devoted staff at Pine Valley. Dan was born October 16th, 1933 in Garber, Iowa to Helen (Dillon) and Lawrence Berns. After graduating from Lamont High School, Dan worked in stone quarries in northeast Iowa before being drafted into the US Army. The night before he left for basic training, his brother Frank took him out to the local dance hall. There he met the love of his life, Helen Pritchard. Dan and Helen married September 14th, 1957 at St. Mary’s Catholic Church in Lamont, Iowa. Dan and Helen provided a great example of love, commitment, and patience (especially on Helen’s end, as Dan would say). Dan was devoted to the Catholic Church and with great sacrifice, he and Helen sent all their children to St. Mary’s School. Dan and Helen raised 10 children. Dan would readily tell you some were easier to raise than others. Dan is survived by loving wife, Helen and children Mark Berns, Ann (Catherine) Berns, Colorado, Michael (Robin) Berns, Virginia, Therese (Paul) Deckert, Richland Center, Jane (Rande) Swanson, Illinois, Thomas (Nikol) Berns, Virginia, Fr. Eric Berns, Sparta, Matthew (Fabiana) Berns, LaCrosse, Anthony (Jenny) Berns, Ellsworth. He is also survived by 28 grandchildren, numerous great grandchildren as well as many nieces and nephews. Dan is further survived by sisters-in law, Phyllis Berns, Ohio, Erma Jane (Pritchard) Bernard, LaCrosse and JoAnn Pritchard, Whitewater in addition to his lifelong friends, the Ward and Peckham families. Dan earned his living as a real estate broker and later in life he went back to school to become a General Appraiser. He and Helen owned and operated Center Realty in Richland Center for many years. Dan prided himself in being a “Jack of All Trades, Master of None”. Always an Iowa farm boy at heart, he was at home on earth moving equipment that he used to build ponds, roads, and a few houses. Dan modeled the importance of faith, hard work, and charity - even in lean times- to all of his children. He will be remembered fondly for his love of family and his wonderful story telling ability. His sweet soul and clever sense of humor lit up a room. In addition to his parents, Dan was preceded in death by his son, Paul and his grandson, Hunter. He was also preceded in death by his brothers Larry, Frank, and David and his sister, Norma. A Mass of Christian Burial officiated by Msgr. Roger J. Scheckel & Fr. Eric Berns will be held on Friday, May 13, 2022, at 11:00 AM at St. Mary the Assumption Catholic Church in Richland Center. A luncheon will follow in the church hall. Visitation will be held on Thursday, May 12, 2022 from 4 PM – 7PM at Clary Memorial Funeral Home in Richland Center with a Vigil Service at 7:00 PM. Visitation will also be held on Friday at church from 10 AM until the time of service. The local military honors unit will provide military graveside rights at Keyesville. In lieu of flowers, it was Dan’s wish that memorials go to St. Mary’s School in Richland Center. www.clarymemorialfuneralhome.com .

The family of Daniel Eugene Berns created this Life Tributes page to make it easy to share your memories.

Send flowers to the Berns family.