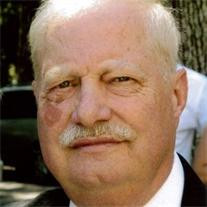 Dennis T. Even, 70, of Ithaca, WI passed into eternity as he was released from the pain of cancer in his home surrounded by his family on Thursday Sept. 13, 2012. Dennis was born on August 22nd, 1942 to Harold and Violet (Schmidt) Even and raised in Sheboygan, WI. He graduated from South High School in 1961 and earned a BS in Mechanical Engineering from the University of WI, Madison in 1966. Dennis worked as a District Engineer and Account Manager at the Torrington Co, a subsidiary of Ingersoll Rand, for 35 years until his retirement in 2001. In 1966, he married Linda Davis and is the father of 3 loving children. In 1983 he married Cecile Vining Johns. They spent their 29 years of marriage throughout southern Wisconsin and Northern Illinois until their retirement here. They have lived in Ithaca for the last 12 years raising their granddaughter Katelyn. Dennis was an avid outdoorsman, who enjoyed hunting, fishing, camping and boating. He was also a car enthusiast, who enjoyed attending car shows with his friends and family. He loved his alumni Wisconsin Badgers and the Green Bay Packers. He enjoyed an active membership in the UU's, Heartland Cruisers, and the Crow Hill Buying Club and the weekly meetings with the Edgar Cayce study group . He loved studying the events of WWII and the civil war, having visited numerous battlefields. Dennis and Ceil were fortunate to travel to many wonderful destinations. Dennis was well known for his ability to fix almost anything, his sense of humor and especially for his service and friendship to others. He was happiest when he was able to help others. He was preceded in death by his mother and father and most recently his brother Randy. He is survived by his wife, Cecile Even of Ithaca, his three children, Elizabeth (Beth & Jeff Rieck) of Hartford WI, Patricia Even (Tricia) of Long Valley, NJ, and Dennis Even(Dan & Carol) of Long Valley, NJ, his step-daughter Marianne Zubek (Mickey), and his brother Terry Even (Randi) of Winter Springs, FL. He enjoyed time with his five grandchildren and six step grandchildren, as well as his great grandson and 4 step great grandchildren. Special note of his granddaughter Katelyn Schwalbach, whom Dennis and Cecile has been raising. A celebration of Dennis' life will take place Saturday, September 15, 2012 at 5:00 PM at the Clary Memorial Funeral Home, 26777 Jelland Drive, Richland Center. Friends may call from 3:00 PM until the time of services. In lieu of flowers, Memorials may be sent to G.R.A.C.E. (Greater Richland Area Cancer Elimination), P.O. Box 213 Richland center, WI 53581 (www.walkwithgrace.com) and the Richland Community Free Clinic, 333 E. Second St, Richland Center. On line condolences can be made at www.clarymemorialfuneralhome.com

Dennis T. Even, 70, of Ithaca, WI passed into eternity as he was released from the pain of cancer in his home surrounded by his family on Thursday Sept. 13, 2012. Dennis was born on August 22nd, 1942 to Harold and Violet (Schmidt) Even and raised... View Obituary & Service Information

The family of Dennis Even created this Life Tributes page to make it easy to share your memories.

Send flowers to the Even family.