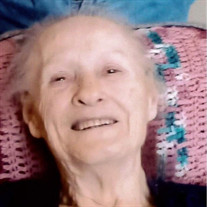 Dorla Mae Dobbs Hardy, age 82, of Muscoda, WI, died at home, Wednesday, June 9, 2021. She was born in Richland County, WI, on May 19, 1939. Daughter of Thelma (Strine) Dobbs Corpora and Leon Marvin Dobbs. She met Wayne Franklin Hardy who was born in Marshall Township, Richland County, WI. They married December 31, 1955 in Rockford, IL, and together had 6 children. Then in 1976 moved to rural Blue River, WI. She had a few jobs in Rockford before the move to Blue River but her favorite jobs were being wife, mother, sister, aunt, grandmother and friend. She & Wayne always helped others in need whether they needed a place to stay, food, or other. They always made room for others in their home and/or at their table. She made up food baskets for people. She made her own recipes & was always praised for how good they were. She shared her recipes with her children & grandchildren & even showed them how to make them. Dorla is survived by her 6 children: Cathy C. Hardy Reichardt (Harvey Andruss) of Muscoda, WI, Wayne A. Hardy (Sherry Metters) of Rockford, IL, Doraine E. Hardy Grassman of Richland Center, WI, Donald C. Hardy (Heather Stone) of Muscoda, WI, Russell E. Hardy (Twila Kalish) of Lake Delton, WI, Jeffrey N. (Jen) Hardy of Shannon IL; two brothers, Harold L. (Yvonne) Dobbs of Boscobel, WI, Santo J. “Joe” Corpora (Julia Levins Corpora) of Avoca; a sister, Lillian Corpora McMahon; along with 60 grandchildren, great grandchildren, great great grandchildren; many nieces, nephews, cousins, friends and many extended family members. She was preceded in death by her husband, Wayne; her parents, Thelma and Leon; her maternal grandparents, Julia Irene (Irene) Powers Strine & Neal Strine; paternal grandparents, Adeline (Addie) Isolene Alderman Dobbs & Clyde Alec Dobbs; 2 sisters, Muriel Corpora Camp & Lenna L. Dobbs Koch; 2 brothers, Richard E. Dobbs & Michael G. Shirley; a niece, 2 nephews, many aunts, uncles, cousins, friends & partner/friend Joseph (Jack) Morgan. The family would like to extend special thanks to her Agrace Hospice Team & all who called, messaged, and visited her over the past couple months. There will be No Services as per her wishes.

The family of Dorla Mae Hardy created this Life Tributes page to make it easy to share your memories.

Send flowers to the Hardy family.