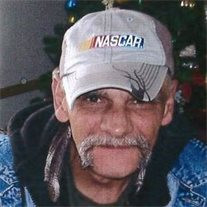 Douglas B. Anderson, age 56, of Necedah, formerly of Reedsburg, died Wednesday, January 23, 2013, at the University Hospital in Madison, Wisconsin. Doug was born December 19, 1956, in Beloit, Wisconsin the son of Lyle & Irene (Oler) Anderson. Since Doug was 4 years old he was raised by Joyce. He enjoyed being outdoors, going to car races, was an avid bicyclist and was an artist. After his death Doug donated his organs to the UW Organ Procurement Organization. Survivors include his mother Joyce (Robert) Ellett of Reedsburg; three sisters, Beth Belcher of Reedsburg, Julie (Scott Jr.) King of Cazenovia, Shelly Winkers (fiancé Jeff Hagen) of Fennimore; six nieces, Nichole, Wanda, Malissa, Kayla, Molly and Whitney; two great nieces, Keiren and Gabriella; three nephews, Derek, Brandon and Jeffery II; two great nephews, Trevor and Carter; other relatives & friends. Doug was preceded in death by his parents, two sisters, Susan Anderson and Marie Hansen. Funeral Services will be held on Monday, January 28, 2013 at 11:00 AM at the Clary Memorial Funeral Home in Richland Center. Pastor Craig Peach will officiate with burial in the Five Points Cemetery in Richland County. Friends may call on Sunday at the Clary Memorial Funeral Home from 4:00 PM to 8:00 PM and also on Monday from 10:00 AM until the time of services. Online condolences can be made at www.clarymemorialfuneralhome.com

The family of Douglas B. Anderson created this Life Tributes page to make it easy to share your memories.

Douglas B. Anderson, age 56, of Necedah, formerly of Reedsburg,...