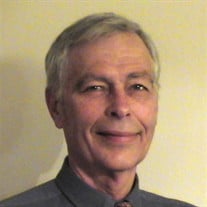 A much-loved husband, Dad, and Papa, Dwight Allen McElree, 68, of Richland Center, Wisconsin, died unexpectedly on Saturday, August 1, 2015, at Meriter Hospital in Madison, Wisconsin, with his family by his side. A Mass of Christian Burial will be held on Saturday, August 8, 2015 at 3pm at St. Mary of the Assumption Catholic Church in Richland Center, Wisconsin. Friends and family are invited after mass to the Clary Memorial Funeral Home reception area for a time of gathering and meal. Dwight was born to Harry and Frances McElree on October 13, 1946, in Oelwein, Iowa. Dwight lived faithfully to his values, teaching others by living by example. His faith and devotion guided him through life as he completed his Masters of Divinity at Wartburg Seminary in Dubuque, Iowa, and began his doctoral work on Theology at the University of Iowa. He pursued a life of helping others as an ordained minister, devoting his pastoral services to churches in North Dakota and Iowa. Dwight then moved into financial planning, guiding the financial security for his clients for 33 years as an investment representative, most recently with Investment Centers of America at Richland County Bank. Dwight embraced his family with unwavering love and devotion. Holding hands until death do us part, Dwight and Connie (Hawks) McElree met while in college in Dubuque, Iowa and married months later, on December 18, 1971: a true love story of 44 years. Dwight and Connie raised three children, Tracey, Emily, and Joel, with a loving and guiding hand. As always a priority to Dwight, he brought out the beauty and gratitude in the word, family. As the family grew with five grandchildren, Dwight filled the family with laughter and happiness. Dwight approached life as a daily blessing and brought laughter and fun to all he touched. From his infamous 1st base splits to the sweat that he left on the racquetball court to the coin flip for the cup of coffee to the intense theology discussions to the baseball coaching with his grandkids and his passion as an Iowa Hawkeye fan. His smiles, his advice, his nicknames, his hugs, his pats on the back, and his jokes have left an imprint that will stay with us forever. Living by example, he has taught us all to love. Dwight is survived by his wife, Connie (Hawks) McElree; his children, Tracey Jeanne McElree, Emily Kate Willoughby (Jason), and Joel David McElree (Laura); his grandchildren, Anabelle Rose Willoughby, Tyler Allen Willoughby, Thomas Anthony Krueger, Lydia Faith Willoughby, and Josephine Ann McElree; and his sisters, Wanda White (Bob) and Beverly Newton (Tim). Recognizing the incredible joy he felt for life, long live the beauty that comes down and through and onto all of us. How wonderful life was while you were in the world.

A much-loved husband, Dad, and Papa, Dwight Allen McElree, 68, of Richland Center, Wisconsin, died unexpectedly on Saturday, August 1, 2015, at Meriter Hospital in Madison, Wisconsin, with his family by his side. A Mass of Christian Burial... View Obituary & Service Information

The family of Dwight Allen McElree created this Life Tributes page to make it easy to share your memories.

Send flowers to the McElree family.