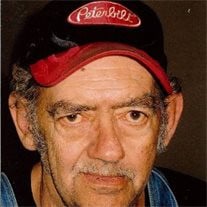 Edward "Eddie" E. Cline, age 70, of Richland Center died suddenly Friday, September 02, 2011 at Iowa University Hospital in Iowa City, Iowa. He was born November 19, 1940 in Doylestown, Pennsylvania the son of Elmer & Margaret (Ingrassia) Cline. Eddie was drafted into the U.S. Army from 1963-1965 and drove fuel tankers. On June 12, 1982 he married Barbara E. Denman at home in Dayton Township, Richland County. Eddie has been driving semi his entire life until the time of his death at age 70. He was employed through Holiday Express from 1972 – 1982 and then had been a self-employed semi-truck driver ever since. Eddie was a dedicated husband who was always there for Barb when she needed him. He also loved his dogs and was known by many to be an animal lover. Survivors include his wife Barb Cline of Richland Center; a sister Kathy (Michael) Jones of Quincy, Illinois; 3 nephews Shane (Cyndy) McNett of Bloomington, Illinois, Chris (Nancy) McNett of Libertyville, Illinois, Travis (Jean) Fruit of Lone Rock; a niece Courtney (Joe) Kloehn of Sextonville; great nieces & great nephews, Gabrielle, Noelle, Annie, Sarah, and Ryan McNett, Haylee and Mackencie Fruit, Carter and Alexander Kloehn; father-in-law & mother-in-law Charles (Elsie) Denman of Sextonville; and sister-in-law Susan (Martin) Fruit of Richland Center. He was preceded in death by his parents. Funeral Services will be held on Friday, September 9, 2011 at 2:00 PM at the Clary Memorial Funeral Home in Richland Center with Fr. Roger J. Scheckel officiating. Local Military Honors Unit will provide graveside rites at the Dayton Corners Cemetery. Visitation will be held on Friday from 11:00 AM until the time of services at 2:00 PM. The CLARY MEMORIAL FUNERAL HOME is assisting the family with arrangements. Online condolences, pictures, & life stories can be made at www.clarymemorialfuneralhome.com.

The family of Edward "Eddie" Cline created this Life Tributes page to make it easy to share your memories.

Send flowers to the Cline family.