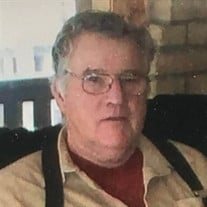 Edward "Ed" James McCaskey LONE ROCK - Edward "Ed" James McCaskey, truck driver, logger, builder, died Saturday, July 9, 2016. He passed away quietly at home surrounded by family after a long struggle with throat and lung cancer. He was 71. McCaskey was born to Donald and Lucy (Oler) McCaskey on December, 4, 1944. He grew up on the family dairy farm just west of Richland Center, with his younger siblings Donald, Diane, and Michael. Ed spent much of his time driving semi, working in his shop, stirring the pot, logging, vacationing (i.e. working in a location not in Lone Rock), stirring the pot, farming, and don't forget...stirring the pot. Survivors include his 2 children, Miranda (John) Stamps of Sallisaw, OK, Matthew McCaskey (Mary Shenk) of Boonville, MO; a sister, Diane (Pat) Clements of Richland Center; a brother, Mike (Sonja) McCaskey of Richland Center; nieces, nephews, other relatives and friends. He was preceded in death by his parents; wife, Jean Binder McCaskey; a son, Mark E. McCaskey and a brother, Donald E. McCaskey. Visitation will be held from 4-7 p.m. on Wednesday, July 13, 2016, at the Lone Rock Congregational Church. A Memorial Service will be held at the Lone Rock Congregational Church on Thursday, July 14, 2016, at 11 a.m. with visitation starting at 10:00 AM. A luncheon will be held to follow the service in the basement of the church. In lieu of flowers, please donate to the Lone Rock Volunteer Fire Department or the Lone Rock Congregational Church in Ed's name.

The family of Edward "Ed" James McCaskey created this Life Tributes page to make it easy to share your memories.

Send flowers to the McCaskey family.