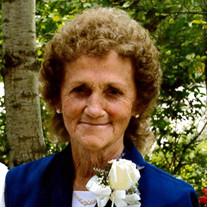 Eleanore I. Astle, age 83, of Cazenovia passed away Sunday, September 9, 2018 at home with family by her side. She was born June 7, 1935 the daughter of Francis and Carol (Owen) Harrison. She married John Astle on May 25, 1957 at St. Anthony’s Germantown, WI. Eleanore began her working career right out of high school at Hankscraft. She then went to the Wollen Mill in Reedsburg, after having their first child she decided to stay home and raise their family. When she finally sent the last child to kindergarten, she went back to work at Hankscraft where she finished her working career of 37 years before retiring in 2003. After retirement, Eleanore enjoyed spending time with her family. She loved to bake! She was a very giving, kind hearted, soft spoken devoted wife-mother-grandmother-great grandmother and sister who was absolutely loved by all. Heaven just received another angel who will be deeply missed. Survivors include her husband of 61 years John Astle; 4 children, Kevin Astle, Tim (Cheryl) Astle, Diana (Dennis) Seep all of Cazenovia, Donna Crary (special friend Scott) of Hillpoint; 8 grandchildren, Brent (Stephanie) Astle, Jeremy (Lindsey) Seep, Joshua (Sara) Seep, Jessica Seep, Janea Sailing, Kate (Aaron) Marquardt, Kole Crary, and Kory Crary; 18 great grandchildren; brothers, Francis Harrison of Cazenovia, Al (Jean) Harrison of Valton; a sister, Shirley (Bernie) Tourdot of Reedsburg; also lifelong friend Betty Durst of LaValle; nieces, nephews, other relatives and friends. She is preceded in death by her parents; brothers, Billy, Clarence, and Pat Harrison; a sister, Janet Mead; and a brother-in-law, Cecil Mead. Upon Eleanore’s wishes there will be no formal funeral services. The Clary Memorial Funeral Home assisted the family with arrangements. On line condolences can be made at www.clarymemorialfuneralhome.com

The family of Eleanore I. Astle created this Life Tributes page to make it easy to share your memories.

Eleanore I. Astle, age 83, of Cazenovia passed away Sunday, September...

Send flowers to the Astle family.