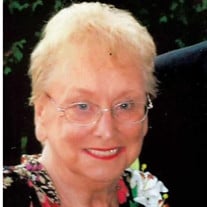 Funeral Link Below https://www.youtube.com/watch?v=r6UsbPasOtA Elizabeth L. “Betty” McMullen, age 89, of the Boaz area, passed away Saturday, December 18, 2021, at home while surrounded by her loving family. She was born on Christmas day, 1931 in Chicago, IL to Walter and Mary (Pavlik) Zeglen. She always felt wonderful to be born on that Christmas day. She went to St. Raphael Grammar school and St. Augustine’s High School. After graduation, she became a switchboard operator for Armour & Co. It was a wonderful job. In April 1950, she bumped into Charles McMullen, who lived 5 doors down, at the A& P. The world stood still. They had a very romantic courtship. Charles was drafted into the Army in June 1951. They were married on November 10, 1951, at Fort Sill, OK, at the Post Chapel on a 3-day pass. In January, he went to Korea and came home 18 months later. She then worked for Consumer Company and later, Draper & Kramer in Chicago. They were blessed with three children- Maureen, Kathleen, and Charly. In 1969, they moved from Chicago to Five Points and became dairy farmers for 25 years. It was a challenge, but they did it. In 1990, Betty and her friend Mary Frawley, went to work at Land’s End to gift wrap. They had a wonderful time. In 2000, Chuck and Betty worked for Meridian in maintenance. They moved to Richland Center in 2006. After Chuck’s passing, family helped move Betty back to the family farm in 2021. Betty did all kinds of crafts. She made a nativity set for St. Phillips Church for 12 years, to be raffled off. In 1994, she went to quilting retreat and became addicted to quilting. She had 4 quilts at the quilting expo in Madison. Most importantly, through her years of quilting, she met so many wonderful and talented women. She gained lifelong friendships she treasured so much. They had so many good times going to retreats and quilt meetings. Most of all, her children, whom she loved more than she could express. They were the joys of her life. The grands, great grands, and great-great are all extra blessings. She is survived by her 3 children Maureen (Norm) Davis of Viroqua, Kathy Maly of Soldiers Grove, Charly (Latisha) McMullen of Tomah; 10 grandchildren Jessica (Jim) Bellomo, Beth Davis, Amber (Scott) Berhorst, Emily Davis, Dawn (Jim) Berghorn, Sean (Shawna) Maly, Michael (Elizabeth) McMullen, Matthew McMullen, Taylor (Naomi) McMullen, Brooke McMullen; 14 great grandchildren – Cole, Kate and Quinn, Wyatt and Parker, Madalyn (Andrew), Kolton, Mason, Brynnley and Dawson, Shay, Sage, Sylvan, and Stroud; one great-great grandson- Waylon; her sister, Carol Ratke of IL; many nieces, nephews, and special friends, including Jean Mezera, Carol LeMoine, Pam Rick, and all the quilting ladies. She was preceded in death by her parents, Walter & Mary (Pavlik) Zeglen; her in-laws, Charles and Emma (Flood) McMullen; husband, lover, and friend of 68 years, Charles J. McMullen; her sister, Helen Urbina Zeglen of Mexico and other relatives and friends from near and far. Special thanks to Agrace Hospice Care. Funeral Service will be held on Thursday, December 23, 2021, at Noon at Clary Memorial Funeral Home in Richland Center with Monsignor Roger J. Scheckel officiating. Friends may call on Thursday at Clary Memorial Funeral Home from 10:00 AM until the time of service. www.clarymemorialfuneralhome.com Click on link to watch funeral service. https://www.youtube.com/watch?v=r6UsbPasOtA

Funeral Link Below https://www.youtube.com/watch?v=r6UsbPasOtA Elizabeth L. &#8220;Betty&#8221; McMullen, age 89, of the Boaz area, passed away Saturday, December 18, 2021, at home while surrounded by her loving family. She was born on Christmas... View Obituary & Service Information

The family of Elizabeth L. "Betty" McMullen created this Life Tributes page to make it easy to share your memories.

Send flowers to the McMullen family.