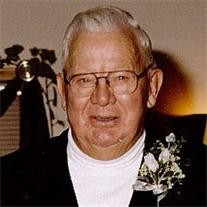 Gerald "Jerry" George Goplin, age 92, of Muscoda was called to eternal peace on April 29, 2012 surrounded by his loving family. He was born on August 23, 1919 to Matt & Josie Goplin at home in Richland County. He married Lorraine Prochaska on November 17, 1943 at the Lone Rock Catholic Church. From this union came six children. Jerry & Lorraine spent sixty years on Goplin Hill Road at their family farm. In 2006, they decided it was time to move to town & purchased a home in Muscoda. In addition to farming, Jerry was part owner of Goplin Insurance Agency in Richland Center and Muscoda. He also served as a member to several boards which included; Riverdale School Board, the REC CO-OP board, as well as the Richland County Board. Some of Jerry's favorite pass times were watching baseball, softball, playing euchre, and bowling. He always wanted to be on the winning team. He liked to tell a quick joke and loved telling stories of times gone by. Above all these things Jerry prided himself as a father and grandfather. He enjoyed spending countless hours with his family. He very much looked forward in his later years, to going to his son Jim's farm & planting his vast garden to which we all enjoyed a plentiful harvest. Jerry was a character to say the least, and will be truly missed by us all. He is survived by his six children, Jane (Kyrie) Kinney of Blue River, Fred (Patricia) Goplin of Muscoda, James (Bobbi Ann) Goplin of Muscoda, Susie (Terry) Ziebarth of Avoca, Rhonda (Scott) Meister of Muscoda, Becky (Dave) Hillman of Milton; 16 grandchildren, 15 great grandchildren; a sister, Theresa Heidtman of Oconomowoc; sister-in-law Mary Pechan of Avoca; brothers-in-law, Harold Cupp of Richland Center, Jim (Elaine) Prochaska of Waunakee and Donald Martin of Dodgeville. He was preceded in death by his loving wife Lorraine, parents Josie and Matt, sisters Maurita (John) Lovas, Bonita Cupp; father-in-law Ed Prochaska & mother-in-law Agnes Prochaska; sister-in-law Kate Martin; brothers-in-law Donald Pechan & Russell Heidtman. Funeral Services will be held on Thursday, May 3, 2012 at 11:00 AM at the Clary Memorial Funeral Home in Richland Center. Burial will be held at St. John's Nepomuk Catholic Cemetery, Castle Rock with Pastor Duane Thomas officiating. Visitation will be held on Wednesday, May 2, 2012 from 4:00 PM to 8:00 PM at the Clary Memorial Funeral Home and also on Thursday from 10:00 AM until the time of services. On line condolences can be made at www.clarymemorialfuneralhome

Gerald "Jerry" George Goplin, age 92, of Muscoda was called to eternal peace on April 29, 2012 surrounded by his loving family. He was born on August 23, 1919 to Matt & Josie Goplin at home in Richland County. He married Lorraine Prochaska on... View Obituary & Service Information

The family of Gerald Goplin created this Life Tributes page to make it easy to share your memories.

Send flowers to the Goplin family.