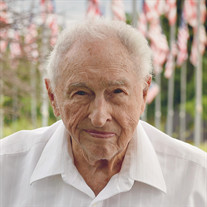 Gerald “Jerry” W. Klatt, age 90, of Richland Center died Tuesday, August 27, 2019, at the VA Hospital in Madison surrounded by his loving family. He was born on August 4, 1929, in Neillsville, WI the son of Arthur and Matilda (Lauren) Klatt. On December 21, 1968 he married Irene L. Schmidt in Eau Claire, Wisconsin. Jerry served in the Korean War from 1952 – 1953. He worked at National Presto Industries for 8 ½ years, repaired TV’s and small appliances, and worked for Gander’s Cleaning Service at Allen Bradley for 15 years. He was an active member of the Richland Baptist Temple serving as elder and treasurer for many years. He also was a member of the American Legion and VFW. He enjoyed fishing, bowling, traveling and spending time with his family and grandchildren. Survivors include his wife Irene Klatt of Richland Center; 2 children, Sherry (Chad) Mueller of Richland Center, Gerald (Cyndy) Klatt of Richland Center, 5 grandchildren, Dylan Fruit (friend Brenda), Lexi Klatt (friend Andrew), Derek Fruit, Kaili Klatt (friend Lucas), Diana Fruit; a great granddaughter, Trinity Fruit; other relatives and friends. He was preceded in death by his parents; 3 brothers, Chester (Francis) Klatt, Lloyd (Mary) Klatt, infant brother Bernard Klatt; 2 nephews, David and Bruce Klatt. Funeral Services will be held on Monday, September 2, 2019, at 5:00 PM at the Clary Memorial Funeral Home in Richland Center with Rev. David Fretz officiating. Visitation will be held on Monday, September 2, 2019 from 1:00 PM until time of service at 5:00 PM. Military graveside rites will be conducted after the funeral on Monday by the Local Military Honors Unit. Burial will be held on Saturday, September 21, 2019, at 1:00 PM at Fairchild Cemetery in Eau Claire County following the Korean War Tribute Stone Ceremony at the Highgrounds in Neillsville, WI. In lieu of flowers, memorials may be given to the family to be decided at a later date. www.clarymemorialfuneralhome.com

The family of Gerald "Jerry" W. Klatt created this Life Tributes page to make it easy to share your memories.

Send flowers to the Klatt family.