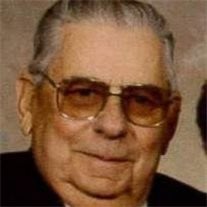 Glen M. Pyfferoen, age 84, of Richland Center died Wednesday, April 15, 2015 at Agrace Hospice Care in Madison. He was born on May 5, 1930 in Willow Township, Richland County the son of Joe and Lucy (Helt) Pyfferoen. On July 25, 1953 he married... View Obituary & Service Information

The family of Glen M. Pyfferoen created this Life Tributes page to make it easy to share your memories.

Send flowers to the Pyfferoen family.