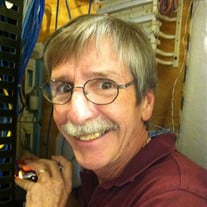 Glenn "Gene" Emerson passed away Sunday June 19, 2016 at his home in Winter Springs, FL. surrounded by his loving and devoted wife, Cheryl, and their children Nicholas and Andrea. Gene fought a short, but courageous, battle with cancer. Gene was born Dec 8th, 1952 in Richland Center, WI and is the son of Glenn and Betty Emerson. Gene was raised on the family farm on Ash Creek and he attended the Paul’s School (elementary) and Richland Center High School. Gene lived the farming life with his family during his early years and was a typical young man of Richland County, who enjoyed squirrel hunting and deer hunting with his friends and his Dad. After high school Gene moved to Florida where he met his wife Cheryl in the Fort Myers area. They married in April 1989 and moved to the Winter Springs area. Gene worked in the communications field for most of his adult life. He established and ran his own business and installed communications systems in various hospitals and businesses throughout Florida. He also had the opportunity to do some installation on cruise ships which took him as far away as Spain. Gene’s favorite pastime was riding his motorcycle. He owned a Road King and he and Cheryl enjoyed riding on weekends with friends. They were able to make the Sturgis bike event in South Dakota and enjoyed that time together very much. Gene also assembled and rode his 1946 Harley Knucklehead to the envy of many friends. He took many people for rides including his mother during a Florida visit! Gene also loved working in his backyard. He spent countless hours creating flagstone pathways and planting hundreds of native plants. He created a botanical sanctuary that has been admired by everyone. Gene is survived by his loving wife Cheryl, his children - Nicholas of New York, NY, and Andrea of Winter Springs, FL. They were the source of dedicated care during this intense and devastating illness. Gene is also survived by a daughter Robin Emerson of Henderson, NV, and Cheryl’s son Scott Steward of Grass Lake, MI. Gene’s mother, Betty (Kittle) Emerson survives him and still lives on the family farm outside Richland Center, WI, Gene has 3 sisters - Judy Emerson of the Stevens Point, WI area; Norlene (Jim Aagard) Emerson of Richland Center, WI; and Deanna (Chuck) Blum of Sun Prairie, WI. 5 grandchildren, 5 nephews and 2 nieces will also miss him very much. He is preceded in death by his father Glenn Emerson. A Celebration of Life Service will be held at 1:00 PM on July 9, 2016 at the Clary Memorial Funeral Home in Richland Center. Visitation will be held from Noon until the time of services at 1:00 PM. A private burial service will be held later. On line condolences can be made at www.clarymemorialfuneralhome.com

Glenn "Gene" Emerson passed away Sunday June 19, 2016 at his home in Winter Springs, FL. surrounded by his loving and devoted wife, Cheryl, and their children Nicholas and Andrea. Gene fought a short, but courageous, battle with cancer.... View Obituary & Service Information

The family of Glenn "Gene" Emerson created this Life Tributes page to make it easy to share your memories.

Send flowers to the Emerson family.