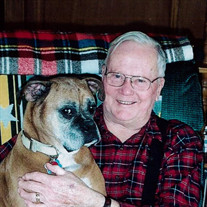 Gordon D. Gochenaur age 95, passed away on Sunday, April 3, 2016 after a long battle with cancer. He was born on September 29, 1920, the son of Hobart J. and Elvira (Jacobson) Gochenaur in Richland Center, Wisconsin. He attended all 12 grades of school in Richland Center and graduated from the Richland Center High School in 1938. With America’s involvement in World War II, he was required in 1942 to report for duty in the Army. He was involved in active duty in the 401 Army Artillery Unit and served until 1946 in Africa and Italy. In January 1946, he married Virginia Olson in Beloit, WI. They made their home in Wisconsin, North Dakota and Florida before returning to Milwaukee, WI, where he worked as a Steamfitter for American Motors for 31 years. They enjoyed basketball games, collecting tools, restoring old cars and traveling with his camper trailer. Following the death of Virginia, he retired from American Motors and moved to a cabin on the Wisconsin River in Muscoda, WI. In 1986 he married Jean Brewer Gochenaur and they made their home in Richland Center. He enjoyed restoring Metropolitan Cars, taking car trips and hosting a Met Road Rally from their home. He is survived by his son James Gochenaur, Milwaukee, WI; two step-children Ellen (Edwin) Noehre, Richland Center and Stephen Gochenaur, Middleton, WI; one granddaughter; nieces nephews, cousins and many friends. He was preceded in death by his first wife Virginia, his second wife Jean, his sister Betty and brother in law Bun Foley and much beloved “Humane Society” friend of 18 years, Ralph. A Memorial Service will be held on Thursday, April 7, 2016 at 11:00 AM at the Schmitt Woodland Hills Chapel on the 2nd Floor, 1400 West Seminary St. Richland Center, WI. The Local Military Honors Unit will provide Military Graveside Rites in the Richland Center Cemetery. In Lieu of flowers the family suggests donations be given in Gordon’s name to the Ocooch Mountain Humane Society.

Gordon D. Gochenaur age 95, passed away on Sunday, April 3, 2016 after a long battle with cancer. He was born on September 29, 1920, the son of Hobart J. and Elvira (Jacobson) Gochenaur in Richland Center, Wisconsin. He attended all 12 grades... View Obituary & Service Information

The family of Gordon D. Gochenaur created this Life Tributes page to make it easy to share your memories.

Send flowers to the Gochenaur family.