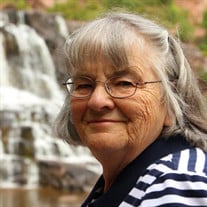 Helen “Esther” Dietzman, age 88, passed away peacefully in her sleep on Saturday, April 11, 2020 at Pine Valley Community Village near Richland Center. She was born on August 8, 1931 in North Clayton to Homer and Ida (Goplin) McDermott. She graduated from Richland Center High School in 1947 and earned her teaching degree from Richland County Teachers College at the age of 18. She married William “Garth” Dietzman on August 23, 1950. Together they raised five children and each of them still believe they are her favorite. She was a lifelong member of the Church of the Nazarene and had a strong and faithful relationship with God. At age twelve, Esther spent time caring for her paternal grandparents in their home while attending school in Richland Center. After school and marrying Garth, she taught for two years at Lower Camp Creek School in Viola and at Hustlers Ridge. A favorite story is that one cold day while preparing the one room school for class, she accidently locked herself out of the school. She had to crawl back in through the coal chute. With her dress dirty from the coal dust, she continued her preparations. She again had to go outside, and in her haste, she locked herself out again! We can only imagine what the students thought when they first saw her that day. Esther and Garth lived in several locations before settling on their Century Dairy Farm in Akan Township near Five Points in 1960. She was a consummate homemaker and partner on the farm. She would help with the milking and crops in the fields and then cook huge meals for the family. She was known for her homemade noodles, fresh vegetables from her extensive garden, cakes, pies and cookies. Later in their farming career, when the milking was done, the family would sit out by the large pine trees in the yard, eat ice cream and “watch the trees grow”. Esther and Garth enjoyed traveling and spending time in the mountains. She was the first woman accepted in the hunting camp due to her wonderful cooking and humor. After Garth’s passing in 1984, she spent time caring for the elderly in their homes, renovating houses, and traveling to Costa Rica on a mission trip to help build a school. She enjoyed spending time with her family and traveled with them throughout the United States and Canada. She will be remembered for her quick wit and wisdom. The day before her passing, her daughter asked Esther how she felt. She responded by saying, “I normally feel with my fingers.” Her many talents included cooking, cleaning, tatting, gardening, playing the piano and organ, ceramics and airing out the house every morning – no matter the temperature. She loved travel, fixing anything, planting flower gardens that were enjoyed by everyone who passed by, and bringing joy to other’s lives. She was a wonderful wife, mother, sister, grandmother and great grandmother and friend to all. With Garth, she gave her children the roots of responsibility and the wings of independence. Together, Esther and Garth taught their children to be avid learners, to work hard, travel often and enjoy life. She is survived by her children, Loreen (Gary) Kalish of Viroqua, WI, Gordon (Debra) Dietzman of Roseville, MN, Beverly (Daniel) Peters of Albany, WI, Brenda (Tess) Dietzman of Wichita, KS, son-in-law, David (Galina) Jacob of Lone Rock, siblings, Alfred (Kay) McDermott, Gladys Beier, and Luella Bell, grandchildren: Ryan Pierce, Heather (Jason) Faber, Michelle (Brad) Saffell, and Dan Jacob, nine great grandchildren: Hayden, Isaac, Isabella, Evan, Jacob, Aaron, Lillia, Olivia, and Joshua along with many nieces, nephews and lifelong friends including Elaine Mortimer. She was preceded in death by her daughter, Dorothy “Louise” (Dietzman) Jacob, her husband William “Garth” Dietzman, and a brother, Everett McDermott, sisters, Belva Jones, Ruth Gander, and Letha Holverson. A small service will be held for immediate family, with a public memorial service to be announced later. A special thank you to Our House Senior Living and Pine Valley Community Village for the love and care they gave her. Memorials may be made to the Church of the Nazarene in Richland Center.

Helen &#8220;Esther&#8221; Dietzman, age 88, passed away peacefully in her sleep on Saturday, April 11, 2020 at Pine Valley Community Village near Richland Center. She was born on August 8, 1931 in North Clayton to Homer and Ida (Goplin) McDermott.... View Obituary & Service Information

The family of H. Esther Dietzman created this Life Tributes page to make it easy to share your memories.

Helen “Esther” Dietzman, age 88, passed away peacefully in her...

Send flowers to the Dietzman family.