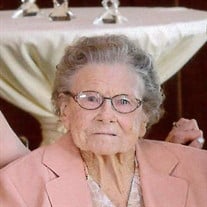 Helen F. Shireman, age 97, of Viola died Sunday, December 18, 2016 at Schmitt Woodland Hills Health Center. She was born on November 17, 1919 the daughter of Hugh F. and Mary (McAnally) McNelly in Chicota, Texas. Helen was united in marriage to Ralph H. Shireman on July 20, 1940 in Waukon, Iowa. During their years on their Ash Ridge farm, Helen helped Ralph on the farm and raised the children. After the children were older, Helen worked at the cannery in Hillsboro and the mink plant in Hillsboro and Viola. She decided to go to school to be a CNA and worked at the Vernon Manor in Viroqua until her retirement. After retirement, Helen enjoyed watching her grandchildren in sports. Whenever someone needed her she was there to babysit or to help out. Her favorite hobbies included cooking and baking especially at Christmas time, you could always expect to find cookies and her husband’s favorite chocolate covered cherries. Whenever you went there you knew she would have something good. She also loved her birds and gardening. Her flowers were beautiful. She loved watching the Green Bay Packers especially when Donald Driver was playing. She was always a joker and enjoyed making people laugh. She meant so much to all of her grandkids. The last few years were spent at Schmitt Woodland Hills; she had a beautiful view of the hills and could watch the deer and birds. She made many new friends there. Thanks to the staff at Schmitt Woodland Hills for making her last year’s enjoyable and to Dr. Tom Richardson for everything he did for her over the years. Survivors include 3 children, Ralph “Bill” (Judy) Shireman of Richland Center, WI, Cindy (Leo) Kraft of Solen, N.D., Kristi (Joe) Durst of Sextonville, WI; 10 grandchildren, Jody (Jennifer) Perkins of Plano, TX, Robyn (Gerald) Perkins of Montello, WI, Jaimie (Andrea) Perkins of Gilbert, AZ, Joshua, (Jeni) Perkins of Baraboo, WI, Rachel (Mark) Turgasen of Richland Center, Rochelle (Joshua) Cornell of Kingston, WA, Raquel (Jason) Fry of Weston, WI, Kari Illsley (Corey Callahan) of Westfield, WI, Brittney Kraft (Daniel Nguyen) of Bismarck, N.D., Jeremy Durst (Emily Landis) of Oconomowoc, WI; 15 great grandchildren, 5 great great grandchildren, 8 step grandchildren, many step great grandchildren; a son-in-law, Bruce Perkins of Janesville, WI; a sister, Ann Kaderavek of Richland Center, WI; sisters-in-law, Marcella McNelly of Rockbridge, WI, June McNelly of Richland Center; a brother-in-law, Frank Parpart of Marshall, WI; many people who called her grandmother; other relatives and friends. She was preceded in death by her parents; husband, Ralph Shireman; daughter, Darlene Perkins; siblings, James McNelly, Christine Parpart and William McNelly. Funeral Services will be held at 11:00 AM on Saturday, December 24, 2016 at the Clary Memorial Funeral Home in Richland Center. Pastor Craig Peach will officiate with burial in the Richland Center Cemetery. Visitation will be held on Saturday, December 24, 2016 from 9:00 Am until the time of service at 11:00 AM.

The family of Helen F. Shireman created this Life Tributes page to make it easy to share your memories.

Send flowers to the Shireman family.