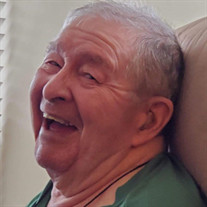 James Doc Carter passed away into the arms of his Lord and Savior Jesus Christ on May 15, 2021, surrounded by his family at his home in Richland Center, WI. He was born on December 26, 1933 to Effie Myrtle (Jenkins) and Oscar Carter in La Harpe, Illinois. He was united in marriage to the love of his life, Vicki Ramona Carter, on December 26, 1954, at Durham Church. Doc and Vicki had many fond memories of their years at Durham Church where they were members. Doc was later stationed in Newport, Rhode Island where he served his country as a member of the US Navy from 1956-1957. Doc and Vicki moved from La Harpe, Illinois to Readstown, Wisconsin in 1970 where they raised their five children. Doc and Vicki farmed in rural Readstown and spent many years in each other’s company, working together most of their life, including 25 years driving school bus. Doc and Vicki built their life on love, trust, and faith in God. Doc devoted his life to the Lord and his family, serving faithfully until he was called home to be with Jesus. Doc believed in hard work, knowing right from wrong, and that a simple life lived by doing things of truth and substance was a full life. Doc’s life was richly blessed. He is survived by his children Robin (Mick) Cosgrove of Richland Center; Rick (Cindy) Carter of Dale, WI; Rory (Kelly) Carter of Omro, WI; Regina (Blair) Collins of Coon Valley, WI; and Ron (Toni) Carter of Richland Center. Doc is also survived by 17 grandchildren, 39 great grandchildren, and 1 great, great grandchild. Doc is survived by a sister Elaine Grundy of Thayer, IL; a sister in law Lana (Roger) Johnston of Westby, WI; a brother in law Larry (Joyce) Johnson of Springfield, IL; two nephews, and four nieces. Doc was preceded in death by his bride of 65 ½ years, his parents, a sister Emogine Howe, father in law Verril Johnson, mother in law Mary Wicks, brother in law Richard Wicks, and nephew Brian Johnson. A celebration of Doc’s life is scheduled on Friday, May 21, at Richland Center Fellowship, 26700 Fellowship Lane Richland Center, WI. A time of visitation with family will be held from 9:30 to 11:30am with a formal service at 11:30am followed by a luncheon in the Fellowship’s Heritage Hall. In lieu of flowers, memorials may be made to Eagle School Scholarship Fund, Greater Richland Area Cancer Elimination (GRACE), Agrace Hospice Care, or the VFW of Richland Center. .

James Doc Carter passed away into the arms of his Lord and Savior Jesus Christ on May 15, 2021, surrounded by his family at his home in Richland Center, WI. He was born on December 26, 1933 to Effie Myrtle (Jenkins) and Oscar Carter in La Harpe,... View Obituary & Service Information

The family of James Doc Carter created this Life Tributes page to make it easy to share your memories.

James Doc Carter passed away into the arms of his Lord and Savior...

Send flowers to the Carter family.