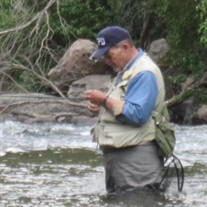 James (Jim) Barnett Leonard Jim Leonard, age 83, was born on October 6, 1937 in Alma, MI and passed away on Thursday, June 17, 2021 in Richland Center, WI. Jim served his country for four years as a pilot in the Air Force and upon an honorable discharge, he became an Indianapolis policeman. Eventually returning to his love of flying and being a pilot, flew for charter and cargo airlines and cumulating as a founder/co-owner of an international air cargo service. In his younger years, he and his brothers enjoyed sports and hunting. Jim was an avid reader, a coffee connoisseur and once retired, loved grilling/smoking meats, target shooting and fly fishing along the Platte River in Colorado. Another love in Jim’s life was his affection for cats and all the entertainment they brought into his life. But the one thing that was paramount to Jim was his affection and love for his wife, Pat. Jim had a great sense of humor and was always ready with stories from his youth, his time on the police force and worldwide travels as a pilot. He will be remembered by his love of Colorado and donning Western wear of boots, shirts and hats everywhere he went. Jim was of a strong nature and will, and despite his many health issues, was able to fight a long bout with cancer for many years beyond expectations set by physicians. Jim will be missed very much by all who knew and loved him. Survivors include: his wife of 38 years, Patricia (Pat) Leonard of Richland Center, WI, sister Melissa (Leonard) Culver of Traverse City, MI, niece Jamie (Culver) Tatman of MI, and nephew Chad Culver of MI, and great nephews and nieces. His close family also included his sister-in-law and brother-in-law Joanne and Bruce Taylor of Muscoda, WI, nephew Joshua Taylor and daughter Evelyn and son Adam of Manchester, England, mother-in-law Eleanor Lane of Richland Center, WI, Kirsten Beaudoin and son William of Dallas, TX, Michelle Sova and daughter Baylee of Ennis, MT, Corey Sova of Grand Rapids, MI, and Taylor Sova of Midland, MI. He was preceded in death by his parents, Dagmar and Ward Leonard, brothers Gordon Leonard and Robert Leonard. At Jim’s request: no flowers, no services will be held. In lieu of flowers, donations accepted to take Jim’s ashes to their final resting destinations in Michigan and Colorado.

James (Jim) Barnett Leonard Jim Leonard, age 83, was born on October 6, 1937 in Alma, MI and passed away on Thursday, June 17, 2021 in Richland Center, WI. Jim served his country for four years as a pilot in the Air Force and upon an honorable... View Obituary & Service Information

The family of James "Jim" Leonard created this Life Tributes page to make it easy to share your memories.

Send flowers to the Leonard family.