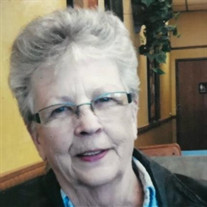 Janet Ann (Shannon) Ferguson, age 81 of Richland Center, passed away peacefully at her home on Monday, February 7, 2022. She was born on July 26, 1940 in Jefferson, Wisconsin, the daughter of Robert and Katherine (Noble) Shannon and the seventh of eight children. After graduating high school, she moved to Madison, WI. She worked at Manchesters Department Store where she met Marvin Ferguson. They were later married on July 16, 1960 and lived in Madison for almost two years before moving to Richland Center where they raised their five children. Janet was a pharmacy tech at Rexall Drugstore and Center Pharmacy for 30 years. After she retired, she volunteered at the Richland Community Food Pantry and at the Richland Center Hospital. Her friendly personality, easy smile, and sincere laughter made her a joy to be around. She had a gift of putting people at ease and making strangers feel comfortable. She loved people! Janet’s favorite thing to do was spend time with her kids and grandkids. They were her greatest joy; she was proud of every one of them and knew what was going on with all of them most of the time! Janet also loved visiting with her relatives and friends and was always happy to hear from nieces and nephews as well. Survivors include her husband of 61 years, Marvin Ferguson of Richland Center, 5 children, Brian (friend Cheryl Carufel) of Portage, IN, Debbie Ferguson of Madison, Daniel (Lynda) Ferguson of New Glarus, Todd (Susan) Ferguson of Woodstock, IL, and Tricia Ferguson of Oregon, WI; 9 grandchildren, Cody and Colton Ferguson of Kankakee, IL, Brianna (Blake) O’Brien of Madison, WI, Logan Ferguson of New Glarus, WI, Alex Ferguson (fiancé Mary Grace Mathison) of Iowa City, Iowa, Kathryn Ferguson of Boulder, CO, Ryne Ferguson, Bryson and Regyn Jelle of Belleville, WI; a sister, Sheila (Ron) Kostroski of Prairie Du Sac, WI; a sister-in-law, Betty Shannon of West Bend WI; many nieces, nephews, other relatives and friends. Janet was preceded in death by her parents, Robert and Katherine Shannon, 5 brothers, Jerry, Tom, Keith, Jim and Bill Shannon, and a sister, Pat Leach. A special thank you to Linda, Merri and Deb for your loving support and care. Thank you also to Agrace Hospice for all of your support through this difficult time. Please join the family in a celebration of her life on February 26, 2022 at Clary Memorial Funeral Home in Richland Center. Visitation will be from 1-3 PM with food being served. Janet’s wishes were that in lieu of flowers, memorials be made in her name to a charity of one’s choice. She loved any organization that helped children or animals. .

Janet Ann (Shannon) Ferguson, age 81 of Richland Center, passed away peacefully at her home on Monday, February 7, 2022. She was born on July 26, 1940 in Jefferson, Wisconsin, the daughter of Robert and Katherine (Noble) Shannon and the seventh... View Obituary & Service Information

The family of Janet Ann Ferguson created this Life Tributes page to make it easy to share your memories.

Send flowers to the Ferguson family.