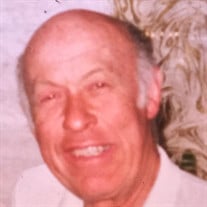 LONE ROCK – Jerry Faber, age 80, of Lone Rock, passed away peacefully on Sunday, June 11, 2017, at UW Hospital. He was born on Oct 18, 1936, the son of Joseph and Marie (Wiedenfeld) Faber. Jerry attended Holy Cross Seminary for 3 years, then being a “Gift to the Ladies” (according to his yearbook), he was welcomed into his senior year into Ithaca High School and graduated in 1954. He married the “love of his life” Dori Bindl at St. Killian’s Catholic Church on July 31, 1965. Jerry Faber proudly ran a 300-acre dairy farm in the beautiful valley of Jaquish Hollow. Every acre had a touch of his creativity and love of craftsmanship. From the Frank Lloyd Wright inspired home and gazebo that he designed and built by hand, to the farm pond he dug out himself so he could go have summer swims and fireworks with his family, to the outdoor trails he carved through the woods so his children could race on dune buggies, he truly created a farm that was an experience, for his wife, his family, his herd, and his legacy. He carried these values with him when he and Dori sold their dairy farm and retired in 2007 to enjoy a quiet life in the woods of Lone Rock. He threw out his alarm clock and never looked back. Rooted in hard work, quiet generosity, and a determination that only a dairy farmer could have, Jerry lived each day with a full heart, a boisterous laugh, and ideally with the top down in his convertible after a swim in his pool till his final days. Here’s to you our lovey, Dad, Papa, Bracka, Lolo, and Grandpa. You’ll be in our hearts forever. Surviving include his devoted wife of 51 years, Dori (Bindl); his sons, Barry (Cyril) and Darek (Kari); his daughters, Deanna (John) and Jenny (Ryan); his grandchildren Madilyn (Nick), David (Alexis), Rylee, Jordan, Kendall, Cree, Chay, Coen, and Cora Faber; his brothers Norman (Marie), Fran (Sue), LaVerne (Donna); his sisters Sharon Lampman, Imelda (Harry) McCarthy, Mary Shields, and Colleen (Bob) Hargrave, as well as 3 great-grandchildren and 1 on the way. Many neighbors and friends survive him. He was pre-deceased by his father, Joseph; his mother, Marie; his sisters, Eileen Eberle, Genevieve Faber; and his brothers, Wayne, Father Emmett, and John. A Celebration of Jerry’s Life will be held on Saturday, June 24, 2017 at 11:00 AM at the Clary Memorial Funeral Home in Richland Center. Visitation will be held on Saturday, June 24, 2017 from 9:00 AM until the time of service at 11:00 AM. In lieu of flowers, memorials may be given to the family.

The family of Jerry Faber created this Life Tributes page to make it easy to share your memories.

Send flowers to the Faber family.