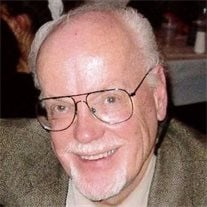 Joachim "Jim" R. Gocht, age 74, died Saturday, August 10, 2013 at his home in rural Ithaca. He was born January 21, 1939 in Crivitz, WI the son of Albert and Anna (Carstens) Gocht. On June 16, 1973 Jim married Janet Humke in Beloit, Wisconsin. Jim enlisted in the United States Army and joined Special Forces and served in the Vietnam War. Jim was a Service Manager at Evans Industrial Communications for several years and then moved to Richland Center and worked as a Systems Engineer at General Communications in Richland and the surrounding counties. Jim was very meticulous and passionate about his work. He enjoyed camping, bird watching, photography, and especially enjoyed the surroundings of the earth sheltered home he designed and helped construct. Jim had a special place in his heart for his three brilliant grandchildren. Survivors include his wife Janet Gocht of rural Ithaca; 2 children, Jeff (Brenda) Gocht of Belleville, WI; Angye Fox of Tampa Bay, Florida; 3 grandchildren, Megan and Alex Gocht of Belleville and Patrick "PJ" Fox of Tampa Bay, FL; a brother, Peter Gocht and a sister-in-law, Nita Gocht both of Chicago; a mother-in-law, Helen Humke of Beloit; 2 sister-in-laws, Carol (Ron) Warren of Louisville, Kentucky, Nancy (Harold) Kressin of Beloit; 2 brother-in-laws, David (Connie) Humke of Fitchburg, Brian (Ann) Humke of Greenville, S.C.; many nieces, nephews, other relatives and friends. He was preceded in death by his parents. A Memorial Service will be held on Wednesday, August 14, 2013 at the Clary Memorial Funeral Home at 1:30 PM with George Burnham officiating. Friends may call on Wednesday at the Clary Memorial Funeral Home from 11:00 AM until the time of services at 1:30 PM. On line condolences can be made at www.clarymemorialfuneralhome.com

The family of Joachim "Jim" R. Gocht created this Life Tributes page to make it easy to share your memories.