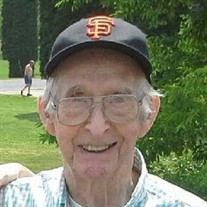 John L. Olson, 97, of Richland Center, originally of Bear Valley, died at the Richland Hospital after a brief illness on Tuesday, September 27th, 2016. John was born into the tight-knit farming community of Bear Valley on Sunday, May 18, 1919, the son of Anna (Schmitz) and Samuel Olson. He is survived by his daughters, Pat Olson (Jim Botting) of West Bend and Lisa Olson (Tim Hoffman) of Sebastopol, CA; granddaughters Sarah and Leah Botting, and grandson John Hoffman. He is also survived by two sisters, Lala (Ron) Radloff of Mesa, AZ and Jean Walsh of Richland Center, and brother Leo (Elaine) Olson of Reedsburg; brothers-in-law Don (Shirley) Goplin of Richland Center and Roger (Lynn) Farrell of La Crosse; sister-in-law Leola Farrell of Richland Center, and many other Farrell relatives. He is further survived by his large extended family, including many nieces and nephews. He was preceded in death by his wife, Joan (Farrell) Olson, his parents, sisters Dorothy Wiedenfeld and Mary Fleming, and brother Cyril Olson. John was born into a family that created its own fun through the love of baseball and music. His dad transformed a cornfield into a baseball diamond where neighbors gathered to play ball. Cheered on by his vocal mother, John established himself as a strong athlete (usually playing shortstop) and was recruited to try out for the Chicago Cubs in 1937. Though he didn’t make the cut, he continued to play for farm leagues and St. Kilian’s church league until he was in his 50s. As a young adult during the big band area, John danced to the music of Glenn Miller, Tommy Dorsey, Duke Ellington, Woody Herman, and others at Rainbow Gardens and Riverview. He was known as the best dancer in Richland County. Singing and dancing gave him joy throughout his life. A 1938 graduate of Lone Rock High School, John attended the agriculture short course at UW-Madison for two years, then farmed on the home place with his parents until his marriage to Joan on February 14, 1955. He gave up farming in 1969, when he was appointed County Executive Director for the ASCS office in Richland Center. Following his retirement in 1987, he became a nationally recognized greeter at Wal-Mart for 14 years. John was a joy and a blessing to all with whom he came in contact. He exuded light, love, and humor, which became even more apparent during his three plus years as a widower living at Schmitt Woodlands Hills. His strong faith, love, and pride in his family uplifted him. He touched many lives with his singing and sense of fun. He was regularly known to say, “We have a hell of a lot of fun over nothing.” We are grateful to Dr. Thomas Richardson, the wonderful staff at Westview/Schmitt Woodland Hills, and the Walsh family for creating a secure and loving haven for John in his final years. A visitation will be held on Saturday, October 8th, 2 to 5 p.m., at Clary Memorial Funeral Home in Richland Center. A private Mass will be held for family. Memorials may be made to St. Kilian Cemetery Association, c/o Erwin Schmitz, 27038 State Hwy. 130, Hillpoint, WI 53937.

John L. Olson, 97, of Richland Center, originally of Bear Valley, died at the Richland Hospital after a brief illness on Tuesday, September 27th, 2016. John was born into the tight-knit farming community of Bear Valley on Sunday, May 18, 1919,... View Obituary & Service Information

The family of John L. Olson created this Life Tributes page to make it easy to share your memories.

Send flowers to the Olson family.