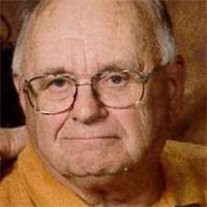 Joseph John Rut, age 78 was called to his heavenly home on Monday, May 11th, 2015. Joe was born on May 25, 1936 in Muscoda, the son of Joseph and Elsie (Steen) Rut. He married Ruth McDonough on August 8, 1964 in Muscoda. Joseph graduated from Muscoda High School in 1954. He served in the U.S Army, in 1959 through 1962. He worked at Sub-Zero, Oscar Mayer, the US Post office and then was employed by the Madison Police Department in 1966 until he retired in 1990. Joe enjoyed being a fingerprint expert while serving in the Identification Bureau of the Police Department. Joe was a member of the St. Johns Corpus Christi St. John the Baptist Catholic Church in Muscoda. Joe was a pilot and enjoyed flying for many years. He also enjoyed camping, canoeing, houseboating, hunting, fishing, going to garage sales, 62 years of riding his motorcycle, and enjoying time with his many good friends and family and beloved dogs. Joe is survived by his devoted wife of 50 years, Ruth Rut, first cousins, Carol Rut Pospichal (Marion), Richard Rut (Donna Imhoff) and Sandra Bomkamp (Virgil),all of Muscoda and Connie Honer Jones (Robert) of Richland Center and two brother-in-laws: James McDonough (June), Harold McDonough (Judy), and several nieces and nephews and cousins. He was preceded in death by his parents, his Uncles Jim (Irma) and Ladd (Violet) Rut, Wesley and Oren Steen, Aunts Della Honer (Hugh), Mabel and Dolly Steen. Sister in Laws: Betty Dieter and Loretta Skinner (Clifton) and Brother in Law Gordon McDonough (Judy) and many good friends. A Celebration Mass will be held on Wednesday, May 20, 2015 at 11:00 AM at St. John the Baptist Church in Muscoda with Fr. Peter Auer officiating. The American Legion Post 85 of Muscoda will provide military grave side rites in the church cemetery. Visitation will be held on Tuesday, May 19, 2015 with a Rosary Service starting at 4:00 PM and visitation from 4:30 PM to 8:00 PM at the Clary Memorial Funeral Home in Richland Center. Memorials can be made to Friends of the Library in Muscoda. On line condolences can be made at www.clarymemorialfuneralhome.com

Joseph John Rut, age 78 was called to his heavenly home on Monday, May 11th, 2015. Joe was born on May 25, 1936 in Muscoda, the son of Joseph and Elsie (Steen) Rut. He married Ruth McDonough on August 8, 1964 in Muscoda. Joseph graduated from... View Obituary & Service Information

The family of Joseph Rut created this Life Tributes page to make it easy to share your memories.

Joseph John Rut, age 78 was called to his heavenly home on Monday,...

Send flowers to the Rut family.