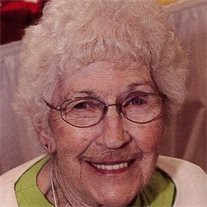 Joyce Elaine (Troxel) (Larsen) (Crary) Prahl, age 83, of Lone Rock, formerly of Jackson, MI, passed away peacefully, surrounded by family, on Monday, January 7, 2013 at the U.W. Hospital in Madison, Wisconsin. Joyce was born in Richland County on November 11, 1929 to Wm. Henry and Gladys (Cooper) Troxel. She was a member of the Richland Center High School Class of 1947. Joyce lived in and around the Richland County area for many years. She relocated to Jackson, MI in 1973 after marrying Ed Prahl, who preceded her in death in 2010. In addition to raising her children, Joyce was employed at Badger Ordinance in the early 1950's. Later, she worked as an Avon Representative for a few years. In 1971, Joyce became a CNA and was employed at the Richland County Home. Then in 1980, Joyce returned to Avon and was a representative for the next 30 years. During those 30 years, Joyce received many awards, including Avon's Rose Club & Presidents Club. She truly enjoyed getting out and meeting people. Joyce also enjoyed traveling. She and Ed attended many IGAEA conferences that took them to College campuses all over the United States and even to London, England. Her favorite vacations were her trips to Hawaii and her cruise to Alaska. In September 2012, Joyce decided to return to Wisconsin to be closer to her older children and siblings. She was happy to be "home", where so many of her children, grandchildren and great grandchildren often stopped in to visit. Joyce is survived by her children, Kerry (Mary) Larsen of Lone Rock, Bill Larsen (Lynn Simon) of Spring Green, Donna Larsen of Sauk City, Sharon Dederich of Lone Rock, Bob Larsen of La Crosse, Carole (Scott) Hall of Jackson, MI and Christopher Prahl of Jackson, MI; and her step-children, Patricia (Bob) Van Zandt, Barb (Rick) Titler, Michael Prahl, Katie (Phil) Barncard, and Nancy (Gary) Potts; 21 grandchildren and 21 great grandchildren. She is also survived by a brother, Don (Carole) Troxel of Richland Center, 2 sisters, Norma Dellemann of Kenosha and Phyllis Camilli of Plymouth; sisters-in-law, Patty Troxel, Mary Fries, Florence (Donald) Moore; a brother-in-law Frank Prahl; many nieces, nephews and cousins. She was preceded in death by a daughter, Linda Larsen-Elton in 1992 and a son, James Larsen in 1967; her parents; a brother Bill Troxel Jr. and sisters, Marie Hale and Betty Spatola. A Celebration of Life will be held in Joyce's honor on Saturday, April 13, 2013 at 11:30 AM at the home of Kerry Larsen (1028 Fairview Ct., Lone Rock, WI 53556). The Clary Memorial Funeral Home is assisting the family with arrangements. www.clarymemorialfuneralhome.com

The family of Joyce Prahl created this Life Tributes page to make it easy to share your memories.

Send flowers to the Prahl family.