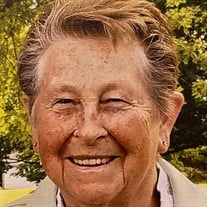 Muscoda, WI – Judith Sandra Remington, aged 82, died October 3, 2021 at the Richland Hospital. She was born on August 19, 1939 in Richland Center, WI, the daughter of Bernard and Gwendolyn Smith. Judy married Val Remington on June 4, 1955 at the United Church of Christ in Richland Center. They lived in the Muscoda area until 1963. They then moved to Whitewater, WI where they raised their three boys. In 1983 they moved back to the family farm near Muscoda. While living in Whitewater area Judy was employed at several local businesses and enjoyed being in a bowling league. How do you sum up a lifetime of love and memories in one short paragraph? Judy added love to the most ordinary daily routines making them extraordinary. From baking cookies to rescuing baby rabbits, she added her loving touch to everything she did. Being a country girl, she lived a beautifully simple life and was happiest sharing it with her family and friends in the farmhouse that once belonged to her Grandma Smith. Judy is survived by her husband of 66 years, Val Remington. Her three boys, Brice (Therese) Remington, Kevin (Kim) Remington and Brian (Sharon) Remington. Grandchildren Keith (Julia) Remington, Brandon (Leigh) Remington, Elizabeth Remington, Cody Remington, Al (Sara) McClaren, Jason (Lindsey) McClaren, Stacey (Matt) Ayen. Also 17 great grandchildren. Sisters, Rita Alessandro, Callie Johnson, Kristey (Lyle) Jelle, Erin Smith, brothers-in-law Dick (Jeannie) Remington, Claire (Myrna) Remington, Ronald (Rose) Remington, Roger Remington and many other relatives and friends. In addition to her and her husband’s parents, she was preceded in death by her brother Rickey Smith and a great nephew, Nathan Krause. Judy requested no formal services. The family will be having a private memorial service at a later date. .

The family of Judith Sandra Remington created this Life Tributes page to make it easy to share your memories.

Send flowers to the Remington family.