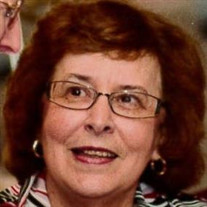 Kay S. Wyman, age 80 of Richland Center died Wednesday, August 16, 2017, at Meriter Park Hospital in Madison, WI. She was born on May 1, 1937 in Mather, WI in Juneau County. On November 10, 1956 she married Larry D. Wyman at the First Congregational Church in Wisconsin Rapids and he preceded her in death on March 16, 2012. Kay worked at the Richland Medical Center for over 40 years, most of them as Assistant Administrator. She saw its growth from the Pippin Clinic to the Richland Medical Center and then the move to join with the Richland Center Hospital. She was also a member of Partners, and worked in the Lobby Shop at the hospital. Kay liked to quilt and read mysteries, but more than that, she loved to travel with Larry in their motor home. They enjoyed seeing the country and making new friends along the way. They were members of the Richland Ramblers and the Badger Chapter of the FMCA, both motor home camping groups. The highlight of their travels was a 3+ month trip to Alaska in 2001. There were endless stories; nothing else compared to that adventure. It was the trip of a lifetime, and the memories never faded. She is survived by a sister Jean Lattimer (Edie Halls) of Fitchburg, WI; 5 nieces and nephews and their children: Julie Lattimer, Mali and Nick Jereczek, Green Bay, WI; Jon Lattimer, Jesica and Ben Lattimer, Poynette, WI; Joy Dawson, Jack and Jadie Dawson, Madison, WI; Jenifer (Jason) Gillette, Monticello, WI; Lance Lattimer, Madison, WI. Five half-sisters-in-law: Valerie (David) Sarton of Colorado Springs, CO, Vickie Fey of Broken Arrow, OK, Patsy (Robert) Ravenscroft of New Lisbon, WI; Wendy Tyrrell of St. Joseph, MO; and Kathi (Wayne) Grider of Lafayette, CO, and special cousin, Sharon Nelson of Hillsboro, WI Kay was preceded in death by Larry, her husband of 56 years, who just as in life, was waiting patiently for her to join him; parents Tom and Valda Lattimer; brothers Tim Lattimer and “Little Jimmy” Lattimer. “Two people who BELONG TOGETHER make a world” A Celebration of Life Service will be held at 11:00 AM on Saturday, September 9, 2017, at the Clary Memorial Funeral Home with Pastor Craig Peach Officiating. Visitation will be held on Saturday, September 9, 2017, at the Clary Memorial Funeral Home from 9:30 AM until the time of services. In lieu of flowers memorials can be made to Partners of the Richland Hospital or a charity of your choice. On line condolences can be made at www.clarymemorialfuneralhome.com

Kay S. Wyman, age 80 of Richland Center died Wednesday, August 16, 2017, at Meriter Park Hospital in Madison, WI. She was born on May 1, 1937 in Mather, WI in Juneau County. On November 10, 1956 she married Larry D. Wyman at the First Congregational... View Obituary & Service Information

The family of Kay S. Wyman created this Life Tributes page to make it easy to share your memories.

Send flowers to the Wyman family.