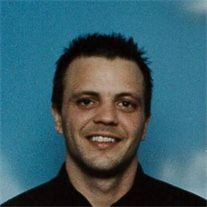 The world has lost one of its shining stars. Kenny Lee Bingham left us on May 8, 2013. Ken was a charismatic, fun loving, hilarious and giving man, a friend to everyone he met. He enjoyed hunting, fishing, poker (Kayla says he cheats), gaming, and playing with his children, grandchildren and nieces. Home repair and remodeling was a couple of his favorite activities. You would never know what the layout of his home would be from one visit to the next. Ken was a wild and fun guy that faced his death with hilarity and sarcasm. He was a deep feeling person, but his sense of humor was one of his most valuable assets. Ken was born April 26, 1970 in Beaver Dam to Kenneth and Nancy Bingham and was the oldest of four children. As the oldest he led his two brothers and sister into trouble and good times. They were always willing to follow anywhere, whether it was a wise idea or not. Ken took his sense of humor into the parenting role with him. He was a joker and a playmate with his kids. When they went too far he would have to let them know and it always started with "I am serious, I am not even joking!" Ken will be missed by many and the world is a dimmer place without him. Survivors include his 4 children Nicole Sillman of Richland Center, Kendra (Zach) Bolstad of Menomonie, Kayla Bingham of Sextonville, Keegan Bingham of Sextonville; 5 grandchildren Lilly, Annette, Addy, Nevaeh, and Nova; parents Kenneth and Nancy Bingham of Lone Rock, brothers and sister, Michael Bingham of Sextonville, Becky (Andrew) Durst of Richland Center, Jason Bingham of Lone Rock; grandmother Geneva Grimesey of Lone Rock; nieces Abby, Anna and Allis Durst; special friend Brenda Inman of Richland Center. A Memorial Visitation will be held on Thursday, May 16, 2013 from 6:00 PM to 9:00 PM at the Clary Memorial Funeral Home in Richland Center. Memorials can be made to G.R.A.C.E. On line condolences can be made at www.clarymemorialfuneralhome.com

The world has lost one of its shining stars. Kenny Lee Bingham left us on May 8, 2013. Ken was a charismatic, fun loving, hilarious and giving man, a friend to everyone he met. He enjoyed hunting, fishing, poker (Kayla says he cheats), gaming,... View Obituary & Service Information

The family of Kenneth Lee Bingham created this Life Tributes page to make it easy to share your memories.

The world has lost one of its shining stars. Kenny Lee Bingham...

Send flowers to the Bingham family.