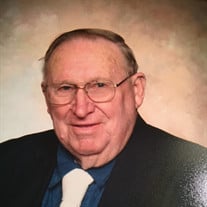 Kenneth R. Kanable: 88 years old of Antioch, IL and Richland Center, WI passed away peacefully Friday, October 13, 2017, at the Village at Victory Lakes, Lindenhurst, IL. He was born December 6, 1928, in Viola, WI the son of the late Elzie and... View Obituary & Service Information

The family of Kenneth R. Kanable created this Life Tributes page to make it easy to share your memories.

Send flowers to the Kanable family.