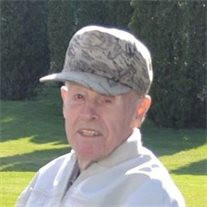 Keven P. Norman, age 92, of Richland Center died unexpectedly on Sunday, March 10, 2013 at the Richland Hospital. Keven was born March 18, 1920 in Richland Center, the son of Arthur & Bessie (Peckham) Norman. He married Elaine Hanson on July 28, 1948 in Wyoming Valley, near Spring Green, Wisconsin. Keven and Elaine settled on the Norman Family farm in Richland Center, where he was a dairy farmer for 15 years. Kev also worked as a union carpenter until his retirement. Kev took great pride in keeping the family home and yard in perfect condition. He could often be seen by passers-by mowing his large lawn, tending to his garden and flowers, pulling any weed that dared to pop up, or high on a step ladder, paint brush in hand. Some of his best times were spent on his John Deere rider. At the age of 90, it was very hard for him to accept that it was time for him to slow down. He was a quality craftsman who helped his son with his many building projects. A good day for him was keeping busy from morning until night. He loved nice cars and in years past, he and his wife Elaine enjoyed going for drives throughout the local countryside. Kev was a very kind man of few words with a heart of gold. He lived his life well, with pride and dignity. He leaves his family with wonderful memories and will be greatly missed. He is survived by three children, Janice (Stan) Retrum of Austin, TX, Cary (Lori) Norman of Richland Center, Kurt (Kelly) Norman of La Crescent, MN, 7 grandchildren, Shannon, Lisa, Troy, Luke, Abby, Cara, Miranda, 5 great grandsons, Skylar, Kyle, Porter, Fynn, Sawyer, sisters-in-law Donna (Warren) Buckner of DeForest and Shirley Norman of Beloit, WI, brother-in-law Jerry (Judy) Hanson of Spring Green, many nieces, nephews, other relatives and friends. Keven was preceded in death by his wife Elaine, parents, a son Paul Norman, and three brothers Aubrey, Reginald and Richard. Funeral Services will be held on Wednesday, March 13, 2013 at 11:00 AM at the Clary Memorial Funeral Home with Pastor Bill Busch officiating. Burial will be held in the Richland Center Cemetery. Friends may call on Wednesday, March 13, 2013 at the Clary Memorial Funeral Home from 9:30 AM until the time of services. The family suggests memorials can be given to G.R.A.C.E. On line condolences can be made at www.clarymemorialfuneralhome.com

The family of Keven P. Norman created this Life Tributes page to make it easy to share your memories.