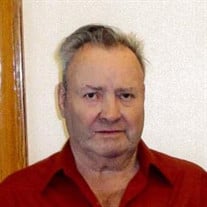 Lawrence E. Montgomery, age 76, died Monday, January 11, 2016 at Schmitt Woodland Hills in Richland Center. He was born on March 4, 1939 in Richland Center the son of Silas & Charlotte (Shannon) Montgomery. He graduated from Richland Center High School in 1957. Lawrence joined the United States Army on March 9, 1960 thru February 28, 1963 and was stationed in Germany as a diesel mechanic. On August 14, 1968 he married Janice Conely and later divorced. He worked as a cheesemaker for 25 years at Foremost Farms in Lancaster. He enjoyed gambling and playing euchre. Survivors include a son, Brent (Dawn) Montgomery of Cazenovia; a stepson, Hartz Phetteplace (friend Matt) of Cascade, WI; 6 step-grandchildren, Terri (Brian) Link of Lyndon Station, Stephanie (Mikal) Johnson of Reedsburg, Kristin Jasper (fiancé Dusty) of Ithaca, Bethanie Jasper (fiancé Micah) of Reedsburg, Caitlyn Jasper of Cazenovia, Matthew Jasper of Cazenovia; 5 great step-grandchildren, Hailie & Tyler Link, Zachary Johnson, Braxton Jasper and Kapri Kalland; a sister, Dolly (Walter) Thomsen of Sun Prairie, 3 brothers, Rudy (Jan) Montgomery of Lone Rock, Jim (Barb) Montgomery of Janesville, Silas Lee Jr. (Julie) Montgomery of Lancaster; ex-wife, Janice Schlafer of Viroqua, other relatives and friends. He was preceded in death by his parents and a sister, Donna Bergmann. A Celebration of Life Service will be held on Saturday, January 16, 2016 at 11:00 AM at the Clary Memorial Funeral Home with Pastor Craig Peach officiating. Burial will be held in the Richland Center Cemetery at a later date. Visitation will be held on Saturday, January 16, 2016 from 9:00 AM until the time of services at 11:00 AM. The Local Military’s Honor Unit will provide graveside services at the funeral home following the service. On line condolences can be made at www.clarymemorialfuneralhome.com

The family of Lawrence Eugene Montgomery created this Life Tributes page to make it easy to share your memories.

Send flowers to the Montgomery family.