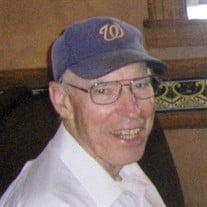 Madison Hubert “Hugh” Fruit of Fairfax, Virginia, passed away on Friday, October 25, 2019 at Inova Fair Oaks Hospital in Fairfax. Known as Hugh to his friends, and Hubert to family, he was born at home on Christmas eve 1939. The sixth of Lester and Myrtle (Haines) Fruit’s ten children, Hubert graduated from Richland Center High School in 1957, where he participated in music and public speaking. He truly enjoyed debate. Hubert also graduated from the Richland County Normal School, a two-year school for elementary school teacher preparation. He taught at a one room elementary school one year and at a two room elementary school the next year. Then he enrolled in Platteville State College, majoring in math and physics. With that degree in hand, he taught at the Platteville High School. Next, Hubert attended the University of Illinois, in Champaign-Urbana where he earned a masters in mathematics. He taught at the University of Minnesota in Mankato for three years. From Mankato, he attended the University of Wisconsin in Madison studying the theory of computers. After a few semesters, he took a job with the Department of Veterans Affairs in 1974, and stayed with that for the next three decades. He worked as a system analyst, and the job took him from one end of the country to the other, working in Chicago, then Los Angeles, then Austin Texas, and finally Washington D.C. He was a database designer involved in the development of many projects, including a major rewrite of the Department’s payroll system, known in the agency as “Pay VA”. He was diligent, reliable, and respected by his coworkers. Hubert retired in 2003. Hubert loved woodworking, singing, playing guitar and piano, and drawing. Family was a big part of his life, and he brought a smile or a laugh to those in it. Hubert had a strong interest in genealogy, and was ready with family stories and funny bits of history for anyone who was interested. He loved the many occasions when his family sang around the piano. He loved nature and was always willing to help anyone in need. Hubert is survived by his siblings Avis (Allen) Unbehaun, Clinton (Vergene) Fruit, Carol (Charles) Dieter, Gordon Fruit, Sandra (Randy) Scott, by his sister-in-law Laura Fruit, and by his brother-in-law Harold Emerson, as well as by many nieces, nephews, other relatives, and friends. Hubert was preceded in death by his parents, by his brother Garland Fruit, by his sisters Marilyn Williams, Wyvonnne Merry, Emmogene Emerson, and by brothers-in-law Ernest Williams and Merlyn Merry. The family wants to thank Charles, Pat, and Marc Baker of Fairfax, VA, for their friendship and caring that the Baker family provided Hubert over the years. Visitation will be held at Clary Memorial Funeral & Cremation Service in Richland Center on November 23, 2019 from 10 a.m. until the time of service at 11 a.m. Ron Fruit will officiate. Memorials can be made to the Leukemia Foundation. www.clarymemorialfuneralhome.com

Madison Hubert &#8220;Hugh&#8221; Fruit of Fairfax, Virginia, passed away on Friday, October 25, 2019 at Inova Fair Oaks Hospital in Fairfax. Known as Hugh to his friends, and Hubert to family, he was born at home on Christmas eve 1939. The... View Obituary & Service Information

The family of Madison "Hugh" Hubert Fruit created this Life Tributes page to make it easy to share your memories.

Send flowers to the Fruit family.