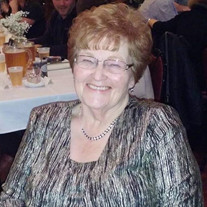 Marita J. (Wolfe) Weidner, age 75 of Spring Green, passed away peacefully at home, surrounded by her family on Saturday, April 21, 2018. She was born on April 29, 1942 in Dodgeville, the daughter of Elmer and Lorraine (Boylen) Wolfe. On September 30, 1961 she married Charles Weidner. They began their life together farming in Wilson Creek. Marita was a member of St. John’s Catholic Church, worked at Lands’ End for 18 years and spent her entire life taking care of her beloved family and friends. She was known for her radiant smile and warm heart. As the matriarch of Wilson Creek she proudly hosted the annual 4th of July Party for 49 years. She was always ready to add another plate to the table for whomever entered her home. Marita was famous for pink cloud, crazy cake, singing birthday messages and a well placed coffee saucer. She was loved by all for her ability to make everyone feel special, whether they were one of the little ones in her life or one of the many she treated as her own. Survivors include her seven children, Theresa (Ed) Kippley, Chuck (Julie) Weidner, Ed (Deb) Weidner, Rich (Deanna) Weidner, Linda (Gary) Feiner, Julie (Guy) Mathias, Karen (Bobbie Krenz) Weidner, 13 Grandchildren Kayla Feiner, Carson Feiner, Nicole (Jonathan) Ford, Jesse (Rebecca) Weidner, Rebecca (T.J.) Sliter, Megan Weidner, Dylan (Alicia) Feiner, Chad Feiner, Jacob Mathias, Nicolas Mathias, Charles Kippley, Louie Kippley, Braeden Weidner, 7 Great Grandchildren Alexis, Charles, McKenzie, Grayson, Raelynn, Iris and Victor, her beloved dog Max. Her siblings Norbert (Sharon) Wolfe, Terry (Sue) Wolfe, Mary Campbell, Don Gabelt, Mary Liegel, Karolyn (Jim) Pulvermacher, Monica (Jerry) Waletzko, and special friends Lana Beckius and Irene Frank. She was preceded in death by her husband Charles Weidner, her parents, sister in law Betty Gabelt, brothers in law Tom Campbell and Alois Liegel. A Mass of Christian Burial will be held on Thursday, April 26, 2018 at 11:00 AM at St. John’s Catholic Church in Spring Green. Burial will be held at the St. John’s Catholic Cemetery. Visitation will be held on Wednesday, April 25, 2018 at St. John’s Catholic Church from 4:00 PM – 7:00 PM and also on Thursday at church from 9:30 AM until the time of service. In lieu of flowers memorials may be given to a charity of your choice. On line condolences can be made at www.clarymemorialfuneralhome.com

Marita J. (Wolfe) Weidner, age 75 of Spring Green, passed away peacefully at home, surrounded by her family on Saturday, April 21, 2018. She was born on April 29, 1942 in Dodgeville, the daughter of Elmer and Lorraine (Boylen) Wolfe. On September... View Obituary & Service Information

The family of Marita Janelle Weidner created this Life Tributes page to make it easy to share your memories.

Send flowers to the Weidner family.