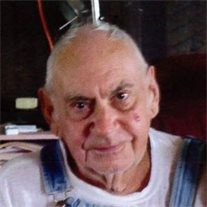 Marvin Gher, age 85, of rural Richland Center died Friday, December 26, 2014, at home on the farm. He was born on September 1, 1929 in Richland Center the son of Edward and Martha (Bethke) Gher. On February 15, 1958 he married Evelyn (Stibbe)... View Obituary & Service Information

The family of Marvin Francis Gher created this Life Tributes page to make it easy to share your memories.

Send flowers to the Gher family.