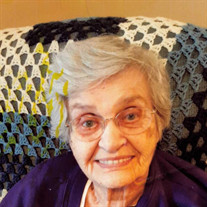 Mary E. (Prahl) Fries, 97, of Richland Center, passed away peacefully with family by her side on Tuesday, December 14, 2021, at Pine Valley Community Village where she had been a resident for the past six years. She was born September 11, 1924 in Richland Center, WI, the daughter of Gustave and Susan (Deitelhoff) Prahl. Mary was raised in Madison, graduating from Madison West High School in 1943. Shortly after graduation she met her future husband, Theron Fries Jr. , while visiting in Lone Rock. In December 1943 they began a marriage that would last more than 50 years. Along with giving birth to 9 children in a 10 year period (1945-1955) she was also a busy farm wife. Mary also worked many years at the O’Brian Brothers Plant in Richland Center and then in Janitorial Services at the University of Wisconsin. In retirement she and Theron would winter in Florida and after his death she lived in Indiana and Florida with children, prior to returning to Wisconsin in 2007. Survivors include seven children; Carol Fries of Madison, WI, Janet Hopper of Bedford, IN, Martha Shaefer of Richland Center, WI, Laura (Bob) Hopper of Bedford, IN, David Fries of Richland Center, WI, Paul (Cheryl) Fries of Reedsburg, WI and Bettie (Rich) Ittner of Madison, WI. Along with her children she is survived by 10 grandchildren, 20 great grandchildren and 1 great great grandchild. She is also survived by1 sister, Florence Moore of Richland Center, WI and 1 brother, Frank (fiancee Christine) of Clearwater, FL. Also many nieces, nephews and friends. Mary was preceded in death by her husband of 51 years Theron Fries Jr., two children, Arthur (Brenda) Fries and Lucy Fries, son-in-law Ed Shaefer, her parents, Gustav and Susan Prahl Browder, step-father John Browder, two brothers and sister-in-laws, William (Trudy) Prahl and Edward (Nancy) (Joyce) Prahl, brother-in-law Don Moore, brother and sister-in-law Lester and Mildred Porter. A celebration of Mary’s life will be held at a later date. In lieu of flowers, donations can be made to the Pine Valley Community Village in her honor. If you have a special memory you would like to share with the family you may mail it to Paul Fries, 2218 Rufus Rd, Reedsburg, WI 53959. .

Mary E. (Prahl) Fries, 97, of Richland Center, passed away peacefully with family by her side on Tuesday, December 14, 2021, at Pine Valley Community Village where she had been a resident for the past six years. She was born September 11, 1924... View Obituary & Service Information

The family of Mary E. Fries created this Life Tributes page to make it easy to share your memories.

Send flowers to the Fries family.