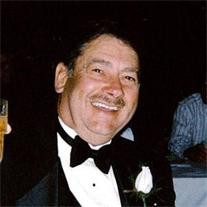 Maynard Newell Ferguson, better known to all as "Buck", died Thursday, January 17, 2013 suddenly at the Richland Hospital, WI. Buck was born in Richland Center, WI on January 24, 1938, to Newell & Lucille (Schoonover) Ferguson. He spent his childhood in Rockbridge, WI and attended Rockbridge School and graduated from Richland Center High School in 1956. During his high school years he made cheese at the Rockbridge Cheese Factory and worked at his grandfather's sawmill in Rockbridge. In 1959 he began working as a forklift operator for American Motors in Kenosha. On July 31, 1960 he married Janice Meeker at Trinity Methodist Church in Richland Center, WI. They had two daughters Lori & Lisa. In 1989 Buck retired from American Motors and in 2003 returned to Richland County. Buck & Jan built their retirement home on 40 acres in Henrietta Township where they have spent the past 8 years. Buck is survived by his wife of 52 years, Jan of rural Cazenovia; two daughters, Lori (Neal) Malavsky of Galesville, WI, Lisa (Richard) Arnell of Iron River, Michigan; two grandchildren, Leah (Lance) Hauser of Holmen, WI, Brian Malavsky of Stevens Point, WI; a great grandson, Jaxon Hauser of Holmen, WI; nieces, nephews, other relatives & friends. Also surviving is a very "special" Aunt Betty Schoonover, and two brothers-in-law, Pat Meeker and wife Barb, and also Chuck Meeker. Buck was preceded in death by his parents; a sister, Donna Cunningham & a brother, James Ferguson. Funeral Services will be held on Monday, January 21, 2013 at 11:00 AM at the Clary Memorial Funeral Home in Richland Center. Pastor Bill Busch will officiate with burial in the Woodstock Cemetery. Visitation will be held on Sunday at the Clary Memorial Funeral Home from 2:00 PM to 6:00 PM and also on Monday from 10:00 AM until the time of services. On line condolences can be made at www.clarymemorialfuneralhome.com

The family of Maynard Ferguson created this Life Tributes page to make it easy to share your memories.

Maynard Newell Ferguson, better known to all as &quot;Buck&quot;, died...

Send flowers to the Ferguson family.