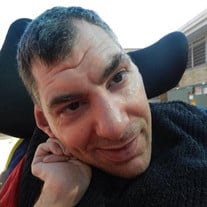 Michael Clyde Dobbs, age 53, of Madison, WI, died on Wednesday, March 29, 2017 at UW Madison Hospital. Michael was born on June 6, 1963 in Richland Center, Wisconsin the son of Robert & Juanita (Coleman) Dobbs. Michael lived at home until age 3 months and then lived the remainder of his life at the Central Colony in Madison. The Dobbs family has appreciated the wonderful and compassionate care the Central Colony has given him the past 53 years. Survivors include his siblings, Dale Dobbs, of Sextonville, Linda Prechter of Greenbay, WI, Barbara Clary of Sextonville, WI, Gary Dobbs of Sextonville, WI, Terry (Becky) Dobbs of Burlington, WI; several nieces and nephews, other relatives and friends. He was preceded in death by his parents, Robert & Juanita Dobbs; brothers, Stanley Dobbs, Robert “Bob” & (Josie) Dobbs; brothers-in-law, Ron Clary & Keith Prechter. Funeral Services will be held at 11:00 AM on Wednesday, April 5, 2017 at the Clary Memorial Funeral Home. Burial will be held in the Sextonville Cemetery. Visitation will be held on Wednesday, April 5, 2017 at the Clary Memorial Funeral Home from 10:30 AM until the time of service at 11:00 AM. On line condolences can be made at www.clarymemorialfuneralhome.com

The family of Michael Clyde Dobbs created this Life Tributes page to make it easy to share your memories.