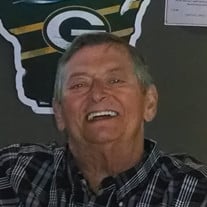 Michael Francis Edwardson, age 68, passed away peacefully at William S. Middleton Hospital Madison Hospice after a long battle from complications due to exposure from Agent Orange during his tour in the Vietnam War. His final days were blessed and comforted by the presence of his family. Mike was born April 29th, 1947 to the late Leroy and Eve (Stanton) Edwardson in Stanley, Wisconsin. He grew up in Stanley, where he was a gifted athlete and student. If you didn’t know of his great athleticism first hand, Mike was always gracious at sharing one of his many “big play” stories. Mike also met the love of his life in this small town and married Cheri Seefeldt in 1968. Mike attended college at UW Stevens Point until his senior year, dropping out one credit short of his Bachelor’s degree, to raise his young family. He later returned to school at age 58 and graduated with a degree in History and Economics, wanting to show his grandchildren the importance reaching your goals. Mike was drafted to Vietnam in 1969 and served his time in the Army as a Military Police officer. While the politics of this war were confusing, Mike was a proud veteran, despite the toll it took on his later life. Mike and his family relocated to Richland Center in 1975. Mike purchased Wallace Cooper and Elliott Insurance Company with partner and good friend Sheila Troxel, a business which they ran together for 31 years, until Mike’s retirement in 2010. Mike had a wonderful work family who he would do anything for and they for him. While Mike enjoyed working in his yard, playing softball, golfing, his poker club with the guys, and, of course, rarely missing a Badger game, his family always came first. He was very involved in his daughter’s many activities while they were growing up and loved being a grandfather and spending time in their lives. Mike will be sadly missed but fondly remembered my many, including his wife Cheri of 47 years and three loving daughters, Robyn (Steve) Coy and their three children, Brendan, Hailey and Carly; Heather (Jesse) Hassemer and their six children, Skylor, Peyton, Sawyer, Bryce, Wyatt, and Kennedy; Lacey Edwardson and her four children, Mikayla, Noah, Lily, and Savannah; three brothers Carl (Penny) Edwardson, Gene (Julie) Edwardson and Paul Edwardson; brothers in law, Rick (Sue) Seefeldt and Wayne (Sandy) Seefeldt; Nieces, nephews and many good friends. In addition to his parents, he was preceded in death by his in-laws, Fred and Margorie Seefeldt. A Celebration of Life Service will be held on Tuesday, January 12, 2016 at 11:00 AM at the Clary Memorial Funeral Home in Richland Center. Visitation will be held on Monday, January 11, 2016 from 4:00 PM to 7:00 PM at the Clary Memorial Funeral Home. IN LIEU OF FLOWERS, memorials may be made to the family for a fund to be determined at a later date. Mike’s family would like to thank the providers and staff of William S. Middleton Veteran’s Hospital for the excellent care he received over the past several years, with a special thanks to the Hospice staff for helping make Mike’ s final days with his family so comfortable and peaceful.

Michael Francis Edwardson, age 68, passed away peacefully at William S. Middleton Hospital Madison Hospice after a long battle from complications due to exposure from Agent Orange during his tour in the Vietnam War. His final days were blessed... View Obituary & Service Information

The family of Michael Francis Edwardson created this Life Tributes page to make it easy to share your memories.

Send flowers to the Edwardson family.