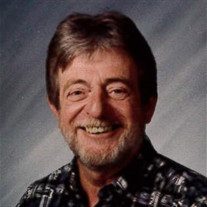 Michael “Mike” L. Stoddard, age 76, passed away peacefully with his wife Laura at his side on January 7, 2019, at UW Hospital in Madison. He was born on November 16, 1942, in Richland Center, Wisconsin the son of Mike and Beulah (Sager) Stoddard. He graduated from Richland Center High School in 1960, the Richland County Teachers College and the University of WI-Platteville. He returned to Richland County to teach at Ithaca Public Schools for 33 ½ years. Mike married the love of his life Laura Armstrong on August 4th, 1979. He had a great love for his black labs and his three toy poodles. Mike loved all sports and was inducted into the Ithaca Athletic Hall of Fame. He coached football, basketball, and track. He was an avid fan of the Badgers and Packers. Mike was a great hunter and was known as the Great Wautashi throughout the halls of Ithaca. He touched many lives with his infectious personality and was a role model to many within and outside his family. He had many adventures with his friends who remained lifelong friends. No matter what was happening in his life he always maintained his sense of humor. Survivors include his wife, Laura Stoddard, her parents, Ray and Therese Armstrong; two dogs, Sky and Joli; a sister, Ruth Schwerin (Dale Balsley); a cousin, Janet Munz (George Urguhart); brother-in-law, Mark (Ruth) Armstrong; sister-in-law, Mary Beth (John) Lund; nieces, nephews, and many friends. He is preceded in death by his parents and a sister, Jennie Lou McDougal. Funeral Services will be held at 2:00 PM on Sunday, January 13, 2019, at the Clary Memorial Funeral Home in Richland Center. Pastor Craig Peach will officiate with burial in the Richland Center Cemetery. Visitation will be held at the Clary Memorial Funeral Home on Sunday, January 13, 2019 from 11:00 AM until the time of service at 2:00 PM. In lieu of flowers memorials can be made to the family. On line condolences can be made at www.clarymemorialfuneralhome.com

The family of Michael L. Stoddard created this Life Tributes page to make it easy to share your memories.

Send flowers to the Stoddard family.