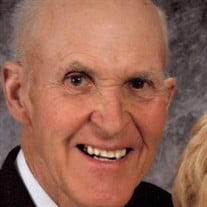 Norman Norbert “Norm” Putz, 77, of Richland Center passed away peacefully on Saturday, April 9, 2022, at Schmitt Woodland Hills in Richland Center. On June 24, 1944, he was born to Norbert and Phyllis (Gottschall) Putz in the township of Pulaski. He graduated from Muscoda High School in 1962. Norm married Eva Jo Turner on April 24, 1965, at Trinity United Methodist Church in Richland Center. After high school graduation, Norm realized that life on the farm wasn’t for him. He began his lifelong career as a mason. After learning and apprenticing in the trade in Madison, he brought his talents to Richland Center in 1973. Shortly after, his brother, Randy, joined him and they formed Putz Masonry. They worked side by side for over 45 years, building numerous fireplaces, chimneys, laying brick and stone products on homes, etc. On June 14, 1977, Norm was involved in a life changing truck accident in rural Boaz. Despite severe injuries, Norm never let it slow him down or stop him from hard work. He continued to do the many things that he loved. Powersports was close to his heart- racing snowmobiles with Eva Jo in their early years of marriage, snowmobile rides with friends and family, visiting the Iola car show yearly, showcasing his prized 1964 Chevrolet Impala convertible at numerous car shows, and enjoyed attending truck and tractor pulls. Norm and Eva Jo were avid euchre players and enjoyed many years in ‘Card Club’. Norm also enjoyed deer hunting on the family farm. He was also an active member in the Town & Country Presbyterian Church. Survivors include his wife of nearly 57 years, Eva Jo Putz of Richland Center; 2 children, Troy (Emily) Putz of Richland Center, Debbie (John) Geisler of Richland Center; 4 grandchildren, Aubrey, Brielle, Dylan, Jaina all of Richland Center; a sister, Sharon Dieter of Muscoda; a brother, Randy Putz (Gale Knoble) of Avoca; a sister-in-law, JoAnn Putz of Muscoda; many nieces, nephews, other relatives and friends. He was preceded in death by his parents; a brother, Dean Putz; and a brother-in-law, Cameron Dieter. Funeral Services will be held on Saturday, April 16, 2022, at 11:00 AM at the Clary Memorial Funeral Home in Richland Center. Burial will be held in the Richland Center Cemetery with Pastor Cathy Van Landuyt officiating. Visitation will be held on Friday, April 15, 2022, at the Clary Memorial Funeral Home from 4 PM – 7PM, and also on Saturday, April 16, 2022, from 10 AM until the time of services. In lieu of flowers, memorials can be made to the family for a local donation at a later date. .

Norman Norbert &#8220;Norm&#8221; Putz, 77, of Richland Center passed away peacefully on Saturday, April 9, 2022, at Schmitt Woodland Hills in Richland Center. On June 24, 1944, he was born to Norbert and Phyllis (Gottschall) Putz in the township... View Obituary & Service Information

The family of Norman "Norm" Norbert Putz created this Life Tributes page to make it easy to share your memories.

Send flowers to the Putz family.