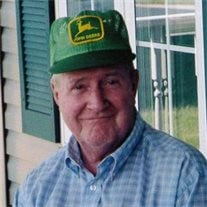 Parker C. Weum, age 82, passed away peacefully on Friday, June 13, 2014. Parker was born the oldest of seven children to Percy C. and Genevieve E. (Mickelson) Weum on February 18, 1932. Parker served in the Army in the 82nd Airborne during the Korean War, from December 9, 1949 to February 17, 1953 and also a member of the Blue River American Legion. Parker was a truck driver until he retired to Richland County. Parker will be remembered for his kind heart, his love of trees, as the best father, grandfather, great grandfather and as a loving husband. Parker always said, "There isn't a tree I don't like" and when I am gone say "Parker is gone, Tractors for sale". He never lost his spirit and kind nature. We will miss him dearly. Survivors include his wife Peggy (Meixelsperger) Weum; daughter Jeanne (Brian) Karpinsky; a son, Paul C. (Barb) Weum; grandchildren, Patrick C. (Danielle) Weum, Becky Weum, Jennifer Karpinsky, Amber Karpinsky; great grandchildren, Ava Banning, Parker C. Weum, Hunter C. Weum; siblings, Donald (Vera) Weum, Charlene Lee and Marlowe Weum; several brothers-in-law and sisters-in-law; nieces, nephews, cousins, other relatives and friends. Parker was preceded in death by his parents, a sister Gloria, brothers Dennis and Warren. A Memorial Mass will be held on Tuesday, July 1, 2014 at 11:00 AM at St. Luke's Catholic Church in Plain. Military Graveside rites will be conducted by the Blue River American Legion Post at St. Luke's Catholic Cemetery. Visitation will be held from 10 AM until the time of services. In lieu of flowers, memorials may be sent to St. Luke's Catholic Church of Plain, St. Mary's Catholic Church in Richland Center or Upland Hills Hospice. The family would like to thank Upland Hills Hospice and the staff at Pine Valley Healthcare. On line condolences can be made at www.clarymemorialfuneralhome.com

Parker C. Weum, age 82, passed away peacefully on Friday, June 13, 2014. Parker was born the oldest of seven children to Percy C. and Genevieve E. (Mickelson) Weum on February 18, 1932. Parker served in the Army in the 82nd Airborne during... View Obituary & Service Information

The family of Parker C. Weum created this Life Tributes page to make it easy to share your memories.

Send flowers to the Weum family.