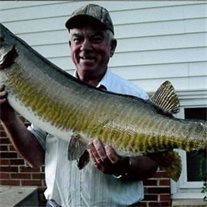 Patrick "Pat" C. Fenton, age 71, of Richland Center died Tuesday, January 20, 2015 at the UW Hospital in Madison, Wisconsin. On December 20, 1943 he was born at Kankakee, Illinois the son of Cyril P. & Mary A. (Harsha) Fenton. In 1961 he graduated from St. Anne High School in Illinois. His first job was as a book keeper at St. Anne Grain Supply. He worked 6 years as a punch press operator and 3 years as a maintenance man at Roper Corporation in Kankakee, Illinois. He also owned and operated a coin laundry business in Kankakee. Pat married Sharon Ann Nicholson on June 12, 1965 in St. Anne, Illinois. From 1965-1973 they raised cattle & hogs in St. Anne. They moved to Richland Center, Wisconsin in 1973. Together they operated a dairy farm from 1973-1986. Then from 1986 -1995 they raised beef and dairy veal calves. In 1997 Pat quit farming and bought apartment buildings and in 2009 purchased storage buildings. Pat loved to hunt and fish with his friends and grandchildren. Survivors include: his wife Sharon Fenton of Richland Center; 2 children Mary (Kelly) Stowell of Richland Center and Mark Fenton (special friend Paula Keepers and her children Conner, Brandy and Brennan) of Richland Center; 6 grandchildren Bailey, Spencer, Campbell, and Ben Stowell, Mason and Megann Fenton all of Richland Center; a brother Steve Fenton of Payson, Arizona; 2 sisters, Dianna Goudreau of Monett, Missouri, and Donna (John) Leinart of Manteno, Illinois, other relatives and friends. He was preceded in death by his parents, 4 sisters, Marjorie Williamson, Linda Krenek, Donna Fenton, Mary Fenton; and a nephew Scott. A Mass of Christian burial will be held on Saturday, January 24, 2015 at Noon at St. Mary of the Assumption Catholic Church in Richland Center. Burial will be held in the Dayton Corners Cemetery. Visitation will be held on Friday, January 23, 2015 from 5:00 PM to 8:00 PM with a Rosary at 8:00 PM at the Clary Memorial Funeral Home and also at church on Saturday from 11:00 AM until Noon. On line condolences can be made at www.clarymemorialfuneralhome.com

The family of Patrick C. Fenton created this Life Tributes page to make it easy to share your memories.

Send flowers to the Fenton family.