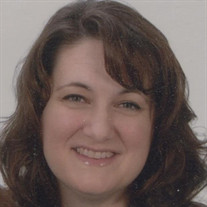 Paula F. McGowan, of Richland Center, was born on June 28, 1975. She passed away on Saturday, April 15, 2017, from complications in her battle with Leukemia. She is survived by her husband, David L. McGowan, employed by The Richland Observer; and her two daughters, Katy, age 7, and Emma, age 4. She is also survived by her parents, Phillip D. Ward and Wanetta F. Ward, and her siblings, brother Phillip David Ward (wife Hannah and children Logan, John and Audrey), sister Jessica D. Jerrett (husband Matthew), and brother Daniel I. Ward (wife Jennifer and son Clark). Additionally, she is survived by her father-in-law, Donald L. McGowan, mother-in-law, Sheri L. McGowan, and brother-in-law Donald L. McGowan Jr. (children Elena and Jim). Paula was an employee for many years at WCCU. She enjoyed time spent with her family, traveling, her ministry, and home schooling her daughters. She was baptized as one of Jehovah’s Witnesses in 1992 and her faith was very important to her. Even while in the hospital, it brought her joy to share her hope from the Bible. For the past few years she and her family had been members of the West Spanish Congregation in Sparta, Wis. Paula was beloved by all. Her lovely and kind personality made a positive impact on her entire family and the community. She will be missed more than words can express. The Funeral Discourse will be held on Saturday, April 29th, at 1:00 p.m. at the Kingdom Hall of Jehovah’s Witnesses, 2091 W. Wisconsin Street, Sparta, WI 54656. The family is being assisted by Clary Memorial Funeral Home. Online condolences may be made at www.clarymemorialfuneralhome.com .

Paula F. McGowan, of Richland Center, was born on June 28, 1975. She passed away on Saturday, April 15, 2017, from complications in her battle with Leukemia. She is survived by her husband, David L. McGowan, employed by The Richland Observer;... View Obituary & Service Information

The family of Paula F. McGowan created this Life Tributes page to make it easy to share your memories.

Send flowers to the McGowan family.